“Alright, Jenny. Are you ready for your Christmas present?” Mom asked.

“Yes, yes I’m ready!” Jenny cried, jumping up and down in place.

Jenny tried to stand still, but it was so hard. It was Christmas morning, after all. What child could stand still on that day?

“Okay, sit down and hold your arms out,” Mom laughed.

Jenny did, nearly shaking with excitement. Mom placed something in her arms, and said, “Alright, you can open them now.”

There in Jenny’s arms was a baby doll.

“Honey, we couldn’t afford that this year,” Mom said.

“This is your present, Sweetie,” Dad added. He was beaming. “His name is Cody. Don’t you like him?”

Her parents laughed, which was more than she could take. She shoved the doll into her mother’s arms and started crying.

The doll began to cry too. A sad, pathetic little wail. Jenny tried to stop her tears, but the doll kept right on. “Why won’t it stop?” Jenny cried.

“Honey,” Mom said. But Jenny didn’t want to hear it. She ran to her room, furious. Who wanted a dumb doll for Christmas?

Jenny couldn’t be coaxed from her room all day. She refused to come out even when her dad begged and her mom threatened to throw away every toy she had.

She wrapped her arms around herself. What a terrible Christmas.

Eventually, she pouted long enough that it wore her out, and she fell asleep.

She woke sometime later to the sound of the doll crying again. One of her parents must have moved it upstairs. But why was it still crying? She shoved her head under the pillow, but she could still hear it.

Jenny pulled her head out from under her pillow. That stupid doll, it was broken on top of everything else. She couldn’t stand it, it wasn’t fair. The doll was the worst Christmas gift she’d ever gotten.

She jumped up from the bed and ran out of her room. The crying was coming from the spare bedroom at the end of the hall. Her parents had put the doll in there, in the bassinet she’d slept in when she was a baby. She snatched it up and gave it a shake.

“Shut up!” But the doll just kept right on wailing.

This was more than she could stand. With the doll in her arms, she ran to the railing that looked over the living room. She threw the doll down, hoping the fall would be enough to break it.

The doll landed on the hardwood floor. It was finally quiet.

Her parents’ bedroom door opened. “Jenny, what are you doing out of bed?” Mom asked.

Dad looked down over the railing. “My God, Cody!” he screamed and ran down the stairs. “Call an ambulance! Jenny, what happened to your brother?”

One in a Million – Original Fiction 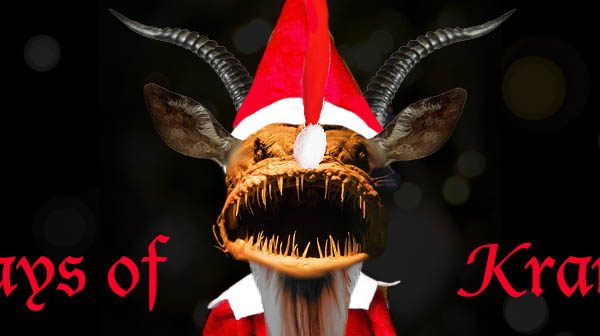 13 Days of Krampus: Who Wouldn’t Go