He coughed again and the woman in front of him turned around again, like clockwork, face pinched but empty. She never said anything, but her eyes said enough. She reminded him of his mother.

The lines in J.C. Penney for checking out were overwhelming, wrapping around the clothing areas, over and over – a labyrinth of bulky bodies clutching their heaps of linens, blenders and clothes. Connor only had one thing, a small jewelry box that was already hot and sharp against his palm.

He coughed again, struggling to suppress it, but succumbing to its twitching urge. The woman turned, frowned, and turned back around. Andy Williams reminded them for the third time that it was the most wonderful time of the year.

He hated it. Every inch of these feelings – the people, the waiting, the box, the music, the woman who reminded him of his mother. The expectations. God, yes, those. He had only been dating Stephanie for two months, if it could even be called dating. She spent most of their time together on Facebook and Pinterest.

He couldn’t really say no to his mother, though. He was already fifty-two and this, unfortunately, had been the longest he had been in a relationship. The thought made his stomach squeeze uncomfortably and that itch was in his throat again, trembling against his larynx.

He coughed. The woman turned. Frowned. Turned back. The jewelry box pulsated. It was the most wonderful time of the year again.

It didn’t matter what he had wanted from his life; it was just endless cycles ultimately determined by causes external to his will. He could carve the years backwards and find every outcome was preceded by the wants and wills of others. The ring didn’t matter. The proposal didn’t matter. The dating. The job, the college, the degree, the first day of school when his mother forced him into the plaid corduroy pants – it was all ultimately others’ actions and reactions that drove his life.

That twitch again, now burning as he tried to hold it in. His lungs stung, felt like splitting, as he desperately clung to the sensations.

What the hell was he supposed to do then?

Coughing harder than before, he felt something crack -physically snap- inside his ribs. He couldn’t stop, couldn’t breathe. He was failing at composing himself, from calling attention to himself.

The woman turned, she frowned, but it did nothing to calm the spasms twisting through his body. He clutched the jewelry box like a lifeline as he wheezed and hacked, that itch more palpable, crawling up his throat.

Horrified, he watched blood splatter from his open mouth, easily spilling onto his shoes with each cough. The itch was now scratching, pushing, gnawing to be loosed from his swollen throat – urgent and desperate in its need.

More horrified when he watched the expelled chunks of flesh fling onto the carpet, as Andy Williams assured him manically that this was the most wonderful time of the year! As the woman still said nothing, face pinched doing nothing but following her own predestined clockwork.

On his knees, he could only expel, couldn’t suck in any air. He was drowning, slamming the jewelry box into the floor in blinded agony. Until finally, it was free. Until finally he could pull air into his torn, bleeding lungs.

Until finally, there in the cradle of purple-veined pulp, was the creature. Now free, it turned towards him. Black and lithe, its long face reminded him of his mother. 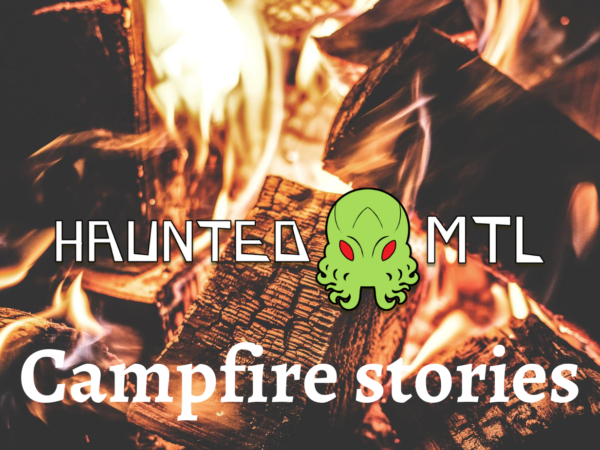 Campfire Stories: Around the Campfire by Jennifer Weigel

Anna and The Apocolypse