This week I take a break from video games and swap console for textbook, controller for pen, and screen for imagination. Table top RPG’s, or pen and paper role playing games, have recently felt a resurgence in their popularity due to modern celebration of nerd culture and the success of Stranger Things that featured the genre’s most well known iteration, Dungeons and Dragons. This genre of gaming is the ultimate progenitor to modern day video games, serving as the inspiration for what an interactive gaming experience should be like, and how things like player statistics and damage are designed and calculated. Having been introduced to the world of table top RPG’s first by Dungeons and Dragons, I sought out other versions of the similar formula and came across what many experts consider to be the pinnacle of pen and paper games, the 1920s set Call of Cthulhu… 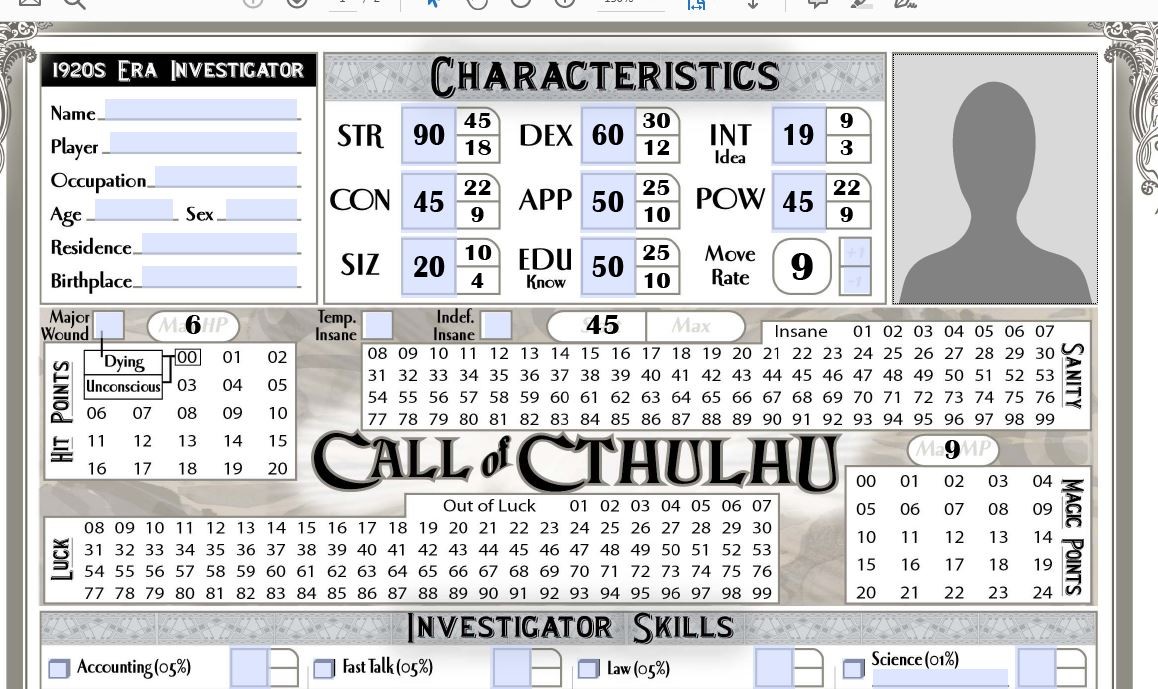 Prepare to die, and use pens, and paper

This review will be geared a little more to those unfamiliar with the genre and its tropes, so it’s necessary to go over the basics of gameplay first. Without bogging down too much in the game’s intricacies, players are first required to build their own character. There is the usual opportunity for player’s to flesh out their characters background as freely and as thoroughly as they would like, some basic stats are rolled for (like luck, naturally), but most have set values that are able to be personally allocated by the player. Here is where the differences in gameplay between the conventional Dungeons and Dragons starts to show – rather than skills and abilities being pre-determined by the player’s race or class, all players are able to personalise their skillset (things like driving a car, analysing textbooks, spotting hidden objects, conducting week-long anthropological research) however they want. This offers players just that much more control over how they want their character to play, increasing enjoyment a little bit more. Following this, characters are dropped into a pre-written campaign guided by a ‘Keeper’ (‘Dungeon Master’) who takes the role of reading action lines, embodying the denizens of the world, calculating damages, and maintaining an overall sense of flow for the group of players. And thus the game really begins…

Players coming from action-oriented video games, or even Dungeons and Dragons may feel the game to be lacking in substance at first due to Call of Cthulhu‘s strong focus on detective work in comparison to combat encounters. As all player characters in game are human, the nature of the gameplay encourages detective work by piecing clues together, sweet-talking, and utilising non-violent paths to avoid danger altogether. There is combat involved occasionally, but since your character is likely a banker or something who has been roped into all this and armed only with a plank of wood against a village full of bloodthirsty cultists, it is unlikely you will survive anything more than a punch to the face. While this may seem like the game is unfairly difficult (and it’s designed to be if you don’t use your head), it certainly makes the game all that more exhilirating knowing that your character is always on the verge of death – something that enhances the horror experience to be had in game.

Call of Cthulhu takes direct inspiration from its namesake, and often simply recreates the narratives of H.P. Lovecraft in its various pre-written campaigns to be played through. The game also takes a 1920s setting, as is the era of H.P. Lovecraft and his tales, and some figures straight from his books (the city of Arkham, loyal cultists, the big boy Cthulhu himself) that truly makes it feel as though each game you play feels like a brand new, and original Lovecraftian work. This game unequivocally understands its origins, and every aspect of its story and gameplay work on Lovecraft’s key themes in his writing; the ordinary against the extraordinary, madness, and hopelessness.

In one of the beginning campaigns played through, the sentiment of the ordinary against the extraordinary was set up fantastically from the get-go. Player characters were thrust from their ordinary backstories and into the extraordinary at the summon of an old benefactor who informs them that he is the only person able to destory an ancient and vengeful genie, before he dies suddenly via an explosion of blood from his mouth. The ghastly occurence immediately besaddles the players with sanity damage (an adjacent gameplay mechanic to health) that continues to take hits as they fall deeper and deeper into the mystery. The most exciting element in a Call of Cthulhu game is the unlikelihood that the player’s will even ‘win’ the campaign. By the time that players reach the spectre they’ve been teased by all game, many characters will have their sanity metres so low that they won’t be able to even face the big bad without going completely mad – a fate equal to death. Those that do survive the ordeal will find their characters in the next campaign burdened with permanent physical and mental scarring, like phobias and anxieties. By even engaging in the game’s design, you are agreeing to play by Lovecraft’s rules, and that is that humans can never hope to win when they are up against all-knowing cosmic deities. 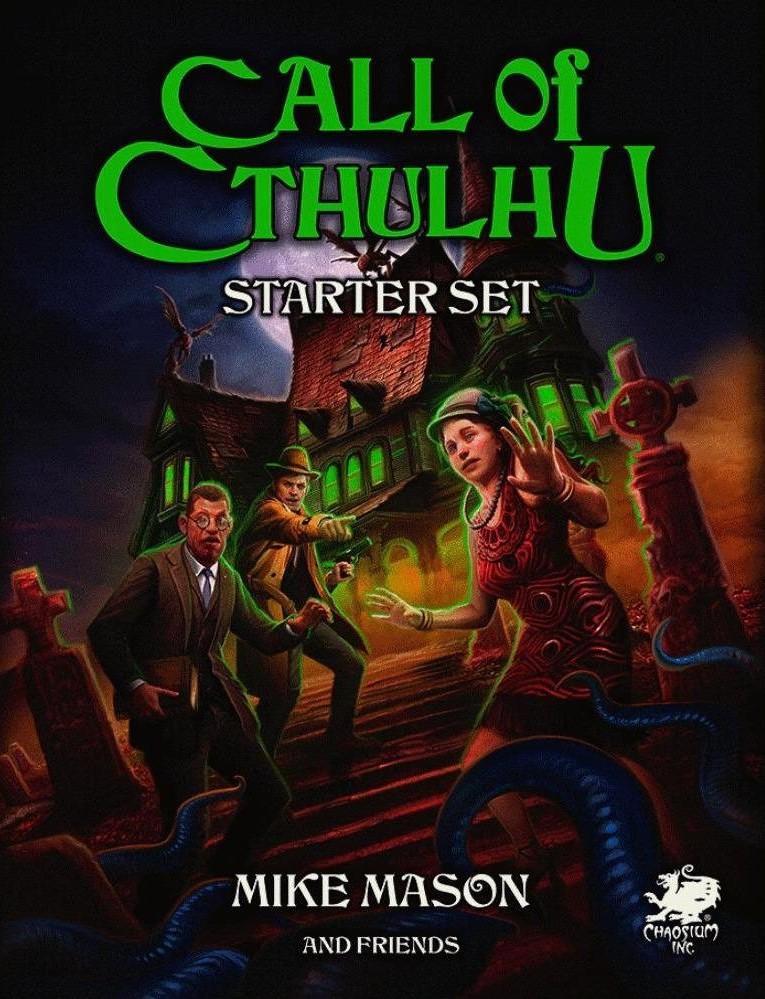 Make your own little cult!

Usually this is where I’d talk about the elements that enhance the horror’s atmosphere, like graphics, aesthetics, soundtrack, etc. But as this is a pen and paper roleplaying game, it features barely any of those elements. And here is where the cleverest part of the Call of Cthulhu experience comes in – you are completely responsible for those things! While the game’s various textbooks will offer some beautiful illustrations of various beasts and settings, much of the atmosphere is completely dependent on the players involved. The game certainly gives you what you put into it. My first playthrough with friends saw us donning some flapper feathers, beads, suits and ties to drum up the 1920s setting. Think about the lighting situation, will you draw the curtains and light some candles? Or play in the dark with torches? Decorate! Add cobwebs around the house! Put together a playlist to accompany you each step of the way and fill it with some spooky jazz! Also, get animated, it’s a lot more fun when everyone puts on a voice and acts out what they’re doing.

For all the positives of Call of Cthulhu, the only things that I can ding it for is its slight inaccessibility (though that is certainly a trait of table top RPG’s) due to the density of its rules for unfamiliar beginners. I’d also say that it may become plodding at times if you’re looking for an action-oriented experience, but that comes down to personal taste. But, as long as you have three to four friends, and one of them is willing to take on the workload of learning the game, and you’re keen to test your survival skills and not your tactical skills, then you’re in for an exhilirating and chilling time. I give Call of Cthulhu five out of five Cthulhus. 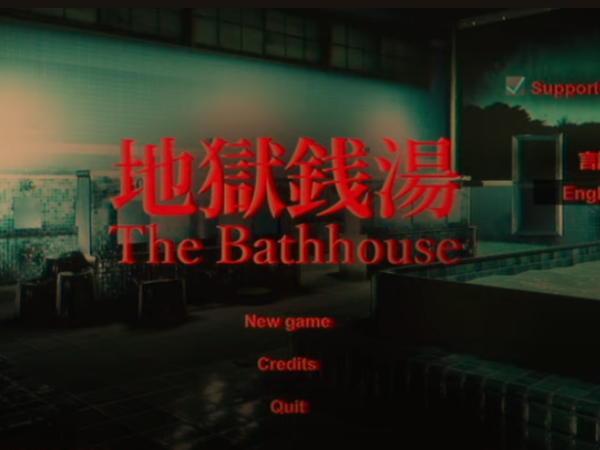 https://t.co/q1GGr4Q6ZH Check out the latest episode of #HouseOfTheDragon with J.M Faulkner #HorrorFamily https://t.co/QHAR5WJAUp
25 minutes ago

Come watch #ahsnyc with us here on Twitter during its premier on October 19th. https://t.co/DBbALUtoHl
4 hours ago