There are a lot of classic stories that start as a re-selling of something. An object that passes hands from one sorry soul to the next, the new victim unwitting of the danger they’ve just accepted with a few quick bucks. We have legends like the killer prom dress and movies about evil prom dresses. There’s been movies/stories about cool boxes bought and houses are a very common theme. And don’t buy dolls from creepy, weird dudes off the street.

So, recently, I’ve taken up a new hobby while looking for some used furniture/reporting asshole price gougers on some local community apps and websites for selling/buying: being absolutely terrified by what people are slinging online.  There’s a plethora of killer kitsch, abnormal antiques, and just plain weird shit that people are positive that you’ll want haunting up your place.

Whether it’s odd, old, gross, or weird, here’s six horrific things that could be in my house right now if I gave up the cash:

Has this ever happened to you?

Trying to settle down with some coffee AND chat with your dead buds is sometimes just a headache!!! But not anymore with Ouija coffee table:

Hell, you don’t need to fork over extra cash for a three-in-one state-of-the-art device like this. For those of you with visual disabilities, the letters are larger than your normal Ouija board, so even grandma can join the fun and still complain to grandpa about the neighbors and their noisy dog! For those who need to keep a few extra spirits for your spirits, there’s a great drawer under the table. And you don’t even need a planchette when you’ve got a clear coffee cup after you’ve drained it.

Get your dark roast with ghosts with this little beauty!

How obliging my glorious spouse would be to have this in our home: 2/5

Ever had to put out your $100 hand-roll Cuban cigar in absolute normative trash? Me neither, but we shouldn’t have to! And for just a fiver, we never have to worry about that again. Someone has created this…art…ashtray for us. Sure, it looks like Sub-Zero has been hitting the clay lately after an inspirational kill. That’s what gives it character.

Apart from the spine, feel free to gaze into the flesh-colored bowl and enjoy what looks to be bodily fluids found at a crime scene, pooling and clotting at the bottom. That sickening disgust from the visceral reaction of this thing is what adds to the beauty of art and expression in…ceramic ashtrays, right?

Yes, dolls are on this list. They will always be on the list. I think you also have an idea about #1, too, deep in your dark heart.

Well, take a look at this doozy of a doll. Any little girl or progressive little boy would love to be haunted by this thing, always watching quietly from the corner…until the night comes.

It has no hands. Fine. I can get over that. It has disjointed, broken feet. Whatever. But…it’s the, well…

I mean, to be fair, this doll has more going on than some creature designs in movies today. The strange hair, twisted in all directions…The X stitched mouth…The long, flat nose…And those eyes…lifeless eyes. Black eyes…like a shark’s eyes.

So, this is very pink and purple. Perfect for anyone who likes those colors and…rounded shapes?

Know what it is yet? Here’s the description: “No longer in use, can be used for plants/pots or whatever creative desire you may think of. I just have no use for it. Sparkly purple cover was put on it.”

Yes, you’re absolutely correct. It’s a prosthetic limb, apparently no longer needed. But you could have the most interesting planter in the neighborhood for the low price of $80!

Now, I’m not saying that prosthetic are weird or creepy or anything like that, I’m just saying the people who have them are – zing! I kid, my amputee friends. What I’m saying is strange about this situation is: trying to sell basically a body part (I know it’s not an actual, but this is still a pretty intimate piece of someone’s life), trying to sell it as a freaking arts and craft project, trying to sell it for $80, and…so pink…

You put that alllll together and it’s just a very interesting story.

In sunken overall’s and hands limply to his side, this jolly little monstrosity welcomes you to rip off his head and take a drink from him.

But that’s the least of our worries.

Along with charming red bow tie and luscious mustache, he’s sporting another set of baby blues.

Yes, that’s right, he’s got a Twilight Zone-esque extra set of eyes. But the description clearly states that this is “a great bar item from the past”. The past of what? Or where? Or whom? I don’t even know what kind of person or place could envision such a strange and grotesque-…let’s just get to the joke:

Have you ever thought, “Boy, I just have this $90 and absolutely nothing to constantly put me in mortal terror…and I want that”? No, of course not, you’re poor like me. We’d rather spend that on pizza, streaming services, and toys for our cats that they’ll never play with.

But if I were so inclined, I would buy this painting.

Yes, that’s correct. It’s a picture of a sad, tattered clown fart-summoning other demon clowns to him. It has to be. Look at their faces. Those are not “lost comrade” faces. Those are…

I’m not a huge fan of clowns, regardless, but this is a special kind of clown that even Gacy might skootch away from. That’s not a dig at the creator; it’s painted well, it’s just…you know…

Oh, I haven’t even scratched the surface yet…We haven’t gotten to tickle couch, honey-addicted bear, dollception, and the sarcophagus. 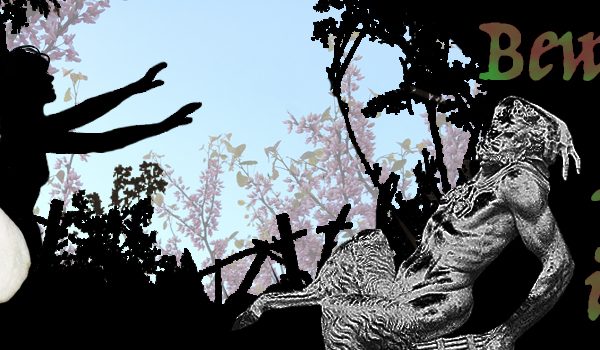 The Price of Sin

Notes from The Last Drive-In: S2E2

In Regards to Herbert West

The one in which some adult lessons are learned - Nicole C. Luttrell - https://t.co/jL8VkaCJ1C - Two lessons can be… https://t.co/8USmibi3gx
43 minutes ago

@Julio_DA Ohhhh that sounds cool! Let us know how you like it.
2 hours ago