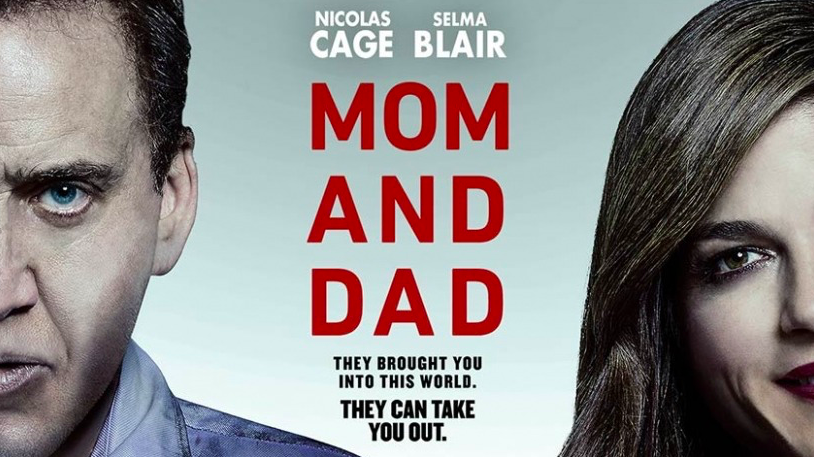 Mom and Dad – Mommie Dearest in the 21st Century

Mom and Dad was one of those movies I only watched because Nicolas Cage is in it. I was in the mood to watch him be a complete maniac, and I got that. But not even the Weather Man himself could make this 88 minute movie completely enjoyable.

The synopsis is short and sweet. Directed and written by Brian Taylor, a mysterious mass hysteria takes over parents everywhere. What do they do? Kill their own children. Carly Ryan (Anne Winters) and her little brother Josh (Zackary Arthur) are among the many kids, teens and tweens fighting to survive their parents’ sudden homicidal tendencies.

I had no sympathy for Carly and, to be honest, I didn’t really care about Josh either. Maybe that says more about me than the movie, I don’t know. All I know is that they were boring and bratty and rude to their housekeeper Sun-Yi (Sharon Gee). I disliked those kids so much, I would have rooted for their parents if they weren’t just as annoying.

And sure, it is a little refreshing to get more than the perfect, happy-go-lucky suburban family. But these are not well-written characters. The suspense was running dry, the techno music was over the top and does anyone really care if the kids survive?

That’s What It’s All About

The best part of the movie was when Carly and Josh’s dad Brent Ryan (Nicolas Cage) has a screaming fit because you can’t cast Nicolas Cage in a movie without adding a Nicolas Cage temper tantrum for no Nicolas Cage reason. I loved watching every second of it because it made no damn sense. He’s all over the place, crying over a pool table he randomly built after getting into a fight with his wife, Kendall Ryan (Selma Blair), who thinks he bought it with money they apparently don’t have.

Instead of simply telling her he built the thing, he smashes it to pieces. All she can do is watch with tears streaming down her cheeks because she hates him and he ruins everything. Because, in the midst of a parental killing spree, it was totally necessary to include a 20-minute backstory of Nicolas Cage doing woodwork in a Misfits tee. Because him singing the Hokey Pokey while destroying his craftsmanship actually, truly made up for wasting my time.

I was disappointed Mom and Dad wasn’t as entertaining as the trailers made itself out to be. I wasn’t expecting an incredible, life-altering movie. Maybe that’s my fault for expecting better. Maybe it’s because it involves a mom and dad trying to kill their children?

All that said, I think this movie is somewhat worth watching, if only because there are funny parts and the concept is unique. I do like how the origin of the mass hysteria was of less importance than the children trying to survive. Considering the runtime and everything else the story had to include (pool table woodworking aside), that was a good call.

Is this a great movie? Not really. Actually, not at all. But maybe you’ll enjoy it. It is a pretty memorable bloody mess and definitely something you can eat a whole pizza to.

Because we know you are interested, here are some more Nic Cage horror movies we’ve covered.