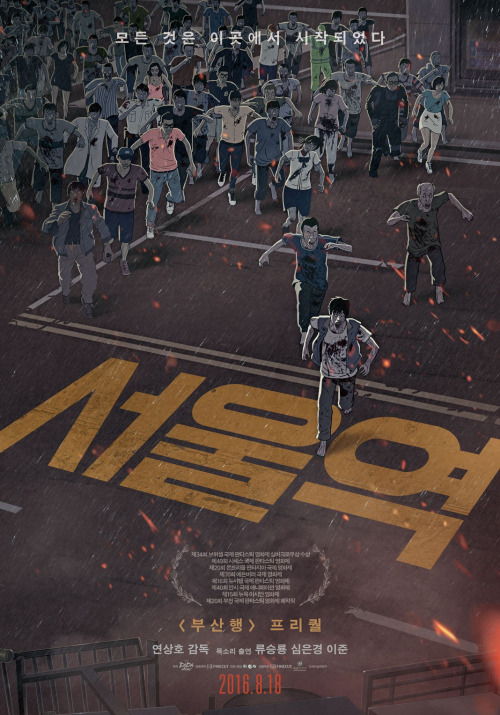 What exactly makes a zombie-film Romeroesque? At his best, George A. Romero used the zombie as a metaphor for some collective ill on society. Often to bring a social issue to light in the guise of gore and terror involving the undead. There have been other zombie films that use the zombie as a metaphor, such as Fido. Few of these films play the terror straight. Often, those that follow tradition rarely have anything important to say at all. That is not the case with Yeon Sang-ho’s Seoul Station.

What is Seoul Station?

The film concerns the plight of the homeless community around Seoul Station as a zombie outbreak begins. Amidst the chaos are three individuals, Hye-sun, a former sex-worker, Ki-woong, her lazy boyfriend, and Suk-gyu, who is looking for Hye-sun, his wayward daughter. The social order disintegrates and the police begin cracking down on the homeless, convinced the violence is merely a riot. Suk-gyu and Ki-woong seek out the missing Hye-sun who seeks safety alongside an older homeless man.

What Works about Seoul Station?

The commentary on the treatment of the homeless by the state and society at large is rather blunt but is very much in the vein of the work of George A. Romero. One particularly powerful scene comes when the police have cornered survivors in an alley. The survivors are a mixture of the citizenry who have fled the undead using a makeshift barricade, yet all the police see are the homeless. Anti-riot gear and the militarization of the police force is, of course, taken to its natural end.

The film’s breakout character goes unnamed; The old man who escorts Hye-sun through most of the film is pragmatic, noble, and a deeply sad character. His fate, as expected, is horrific, but his purpose as the representative of the larger failings of society ends up being quite effective.

The film also features a twist that is immensely satisfying. Rather than a cheap reveal, the twist ends up being recognizable upon re-watching as a proper reveal should be. It radically alters the dynamics between the three main characters in a chilling way.

An animated horror film is a welcome sight, but the animation of Seoul Station is a combination of 3D character models with toon shading and traditionally illustrated backgrounds. At times this works, but the character animation can feel particularly rough, particularly when characters find themselves running, which happens a lot.

The film’s arguable lead, Hye-sun, is not a particularly strong character. Most often she serves as a hapless victim who gets other characters killed by virtue of her own inability to survive. There is still room for characters like this in fiction, of course, not everyone is a natural survivor. Unfortunately, Hye-sun does not have any real development throughout the film and that can be frustrating.

It is rare to find a zombie movie in the last 20 years in the traditional Romero style that is truly excellent. Seoul Station is one of those films that manages to do what even George Romero struggled to do within the final films of his life. If Seoul Station is any indication, Train to Busan should be an excellent film when it finally lands on Shudder later this month. For now, though, you can prepare for it by watching Seoul Station on the streaming service.

Have you seen Seoul Station? If so, what did you think. Please let us know. Please continue to check Haunted MTL for more zombie goodness.