The first harvester and forwarder arrived as if on cue, despite the horde of protesters.  The gas pipeline was going through.  Both sides had played politics and the bureaucratic duel had spanned months into years but eventually the commercial interests won out.  The resource was just too valuable and too badly needed by the growing urban populace.  After finalizing the path the pipeline would take to make as many people as happy as possible (because let’s face it, this was more about minimizing complaints and gaining political leverage than about the environmental impacts or honoring Indigenous Peoples), plans were in action to bring the project to fruition.

As the deforestation crew descended upon the scene, the well positioned riot-gear-outfitted guardsman made sure they were as unhindered as possible, breaking up the crowd as they moved through.  The protesters stepped or were shoved aside, still continuing to chant and brandish signs.  All except for one – she was an elderly woman, with long white hair flowing in wispy tendrils about her gaunt frame in a sort of ethereal otherworldly manner.  She wore loose fitting peasant’s clothes that bespoke a long-gone era and leaned against her solid wooden walking staff, her moss green eyes steeled on the oncoming procession.  How she had managed to evade the wall of guardsmen was anyone’s guess.  The monster machines were forced to stop.

“C’mon Grandma,” the crewman called out from the harvester.  The name on his pale blue shirt simply read Bill.  “We have a restraining order against you folks.  This is happening whether you like it or not.  You don’t want to get dragged off to jail, do you?”  One of the riot-gear guardsmen took a step forward.

The woman smiled knowingly and cackled loudly, her shrill voice echoing through the crowd and the path and the earth and the sky like a primordial spirit unleashed.  The world around her fell deathly quiet.  She raised a gnarled hand and extended a crooked finger to point at the crewman named Bill.  She spoke slowly and gleefully, “To Hell with you.”

Bill rolled his eyes and revved the engine of the mechanical behemoth in response, perhaps to persuade the old woman to move along.  He’d listened to too many slurs today already; he was just trying to do his job.  It may not have been pretty, but it was progress, and everyone just needed to step out of the way so he could get on with it.  As the riot-gear-outfitted guardsman closed in to escort the old woman from the path, she mysteriously vanished in a cloud of pale green smoke.

Bill woke with a start.  He had been amazed that the crew was able to get to the site so uneventfully.  There hadn’t been any protesters and the few stragglers that had remained had stayed remarkably out of the way, chanting, singing and brandishing signs from afar.  The site itself was well guarded from the perimeter, perhaps more so than was necessary since everything was just quietly waiting for the demolition to start.  Bill had expected more backlash, as was evidenced by his recurring nightmares from before the job had even started.  But the protesters never entered the woods.  It had all been too easy.

It was 2 AM and the world was still enveloped in thick, heavy darkness.  Bill knew he should try to get another couple hours of sleep before the grueling day ahead of him, but something wasn’t quite right.  That old woman, her icy gaze seemed to bore a hole straight into his soul.  He couldn’t seem to get her out of his head.

Suddenly and without any warning, a piercing shriek rang through the forest like a throaty impish laugh.

Bill was on his feet before he even realized he had leapt out of bed.  He warily stared at the trailer door.  The wind howled through the trees in the distance.  A familiar voice behind him called out, “What was that?”

Sid was sitting up in his bunk, rubbing his eyes.  “Not like any owl I’ve ever heard…”  He turned to Bill, “Can’t sleep, eh?”

“It’s nothing.”  Bill returned to his bunk.  “Let’s try to get some more rest.  Big day tomorrow.”

“Sure thing, boss,” Sid murmured as he rolled over.

Bill lay in bed staring at the trailer ceiling.  As he drifted back to sleep he heard an unnerving cackle float through the wilderness.  To Hell with you, he thought to himself as he succumbed to slumber.

The next day, after coffee, the crew went to work.  They began work on the deforestation of the first swatch of trees bearing spray painted X marks from the survey team who had demarcated their route.  All they needed to do now was follow the signs and clear the debris.

As Bill began to down a nearby pine with the harvester, cutting through the trunk effortlessly to topple the tree to the side, he saw a flash of movement out of the corner of his eye.  He caught a glimpse of what appeared to be an old woman in peasant’s clothes as she darted unnaturally in and out of the trees to his left, disappearing behind and betwixt trunks.  It couldn’t be, surely he was imagining things…  He paused and turned the key in the ignition.

Sid’s voice echoed over the radio from the forwarder, “Something wrong, boss?”

The rest of the team was working on another ridge nearby where they continued what they were doing.  There was no call for help, no need for follow up; Bill was on top of it.

Bill got out of the machine and traversed the muddy broken path up the hill to the stand of trees where he had beheld the vision.  He peered behind the evergreen where he had last seen the old woman and was greeted by a skull on a pike.  He leapt backwards, slipping on some moss and falling to the ground.  As he rose, he looked up at the skull pike again: it was nothing more than a fallen branch.  He stood and fingered the drying needles, scattering them to the breeze.  The wind mocked him, whispering in an ancient and shrill sigh, “To Hell with you.”

Bill turned to return to the harvester and was immediately confronted by the old woman from his dream, standing between him and the sleeping mechanical monster.  She stared through him, her icy green gaze penetrating his very soul.  Her wild white hair whisked to and fro about her shoulders as she stepped toward him.  She smiled, “How nice of you to come, just in time for dinner.”  She ran her tongue along her razor-sharp teeth, filed to dagger-like points.

Bill turned to run and slipped on the muddy moss-encrusted mound.  He slid down the hill and into a small previously unseen ravine off to the side of their work site.  A hidden pocket in the earth engulfed him.  He found himself sprawled in a muddy pit with his head reeling, roots trailing the edges of the earthen walls of his prison.  A cackle greeted him from the darkness just behind his field of vision.

Bill pivoted to find another skull on a pike.  He backpeddled into the other wall of the pit, skinning his hand on a rock, and blinked.  Not a skull, but a root wrapped around a smooth stone embedded in the dirt, greeted him.  He shook his head and called out, “This isn’t funny…  Whoever you are, we have a restraining order.  You aren’t to set foot on these premises.”

The hoarse giggle resounded through the pit and the earth in response.  “No, you are mistaken,” it laughed.  “It is I who have the restraining order against you.  Only a fool enters a witch’s wood and expects to leave alive.”

“Who…  Who are you?” Bill called out to the empty tomb.

“You may call me Babushka Ježibaba,” the old woman trilled, reappearing out of the shadows right before him.  Her nostrils flared wide as she sniffed him up and down and smiled through her serrated grimace, “We feast tonight, my sisters…”

The old woman grappled Bill by the throat and pulled him towards her in a sweeping motion, effortlessly overpowering him.  She leapt from the pit into the gaping door of a house on stilted chicken legs, which took off into the deep woods away from the mechanized mayhem of the construction zone.  “Welcome to Hell,” she crowed as they bounded out of sight…

“Bill,” Sid called out as he came upon the abandoned harvester.  “Where are you?”

No answer.  The crew was packing it in for the day and Bill had scarcely even touched his section.  His radio stretched idly on its cord, dangling above his empty seat.  Sid glanced to the left and saw what appeared to be an old woman weaving in and out of the trees off to the side.  “To Hell with you,” the wind whispered as he left the harvester cab and squinted at the vision.

“Bill, you over there?” Sid shouted as he hurriedly followed the elusive presence into the woods… 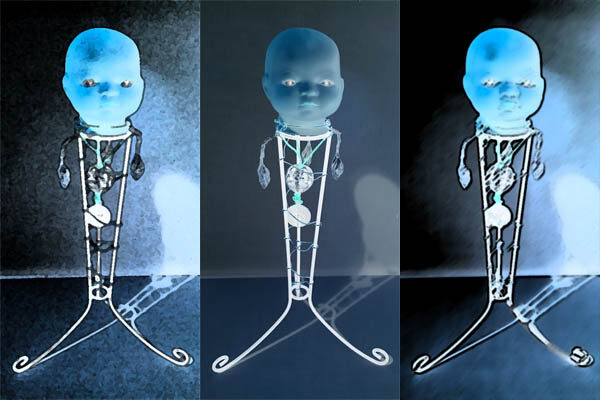 Ever have those moments where you just drift off somewhere? Ever have that happen when you're driving? Where do we… https://t.co/c8kAFzvheB
1 hour ago

Sunless Sea, a Game Review Sunless Sea is a 2015 survival horror that prioritizes exploration in a seafaring rogue… https://t.co/SJglTeepti
2 hours ago