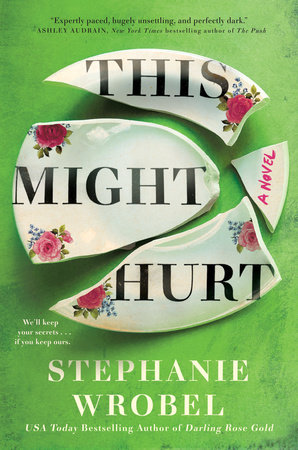 All Hit, No Miss: Stephanie Wrobel’s Sophomore Novel “This Might Hurt” Takes On A Cult Atmosphere That Will Blow You Away

Does the title of this review not intrigue you enough? Get this.

Wisewood is a no nonsense resort that culls applicants from far and wide. It brands itself as an exclusive retreat, only accepting 10% of applicants. Those who endure the six month detox, even free from electronics, at Wisewood leave as new people, invigorated with life and healing. Is it all it’s cracked up to be?

Natalie Collins last heard from her sister Kit when she told her she was going away to Wisewood. It’s now been more than six months and Kit hasn’t returned. Nat goes after her and discovers a lot about Wisewood and her sister along the way.

The novel focuses on three perspectives: Nat, Kit, and a female voice who is unknown until later in the text. The only complaint I have about the novel is that towards the beginning, the shifting perspectives could be difficult to navigate until you got a grasp on how the author was using section breaks and chapter titles to indicate the speaker. The unknown third perspective was probably the most intriguing and riveting of all. We listen as the narrator tells us about her drive to become a magician, performing death defying stunts. We also travel along with Nat as she searches out Kit and Kit as she lives her daily life at Wisewood.

This novel gripped me by the face and never let me look away until I turned the last page. You can read what others have to say on Goodreads, but take my word for it and pre-order this baby right now!! This novel releases on February 22, 2022 and is worth every penny. This novel takes you for a ride through manipulation, unbreakable bonds, and the search for the truth.

I was a bit skeptical of reading Wrobel again, as I read her debut novel Darling Rose Gold and wasn’t too impressed. I gave that novel a 3/5. I am now a converted Wrobel fan after This Might Hurt and will ALWAYS auto-buy her new books now. Put this one on your reading list for February!

Overhyped and Underwhelming: Shea Ernshaw’s “A History of Wild Places” is Just Average