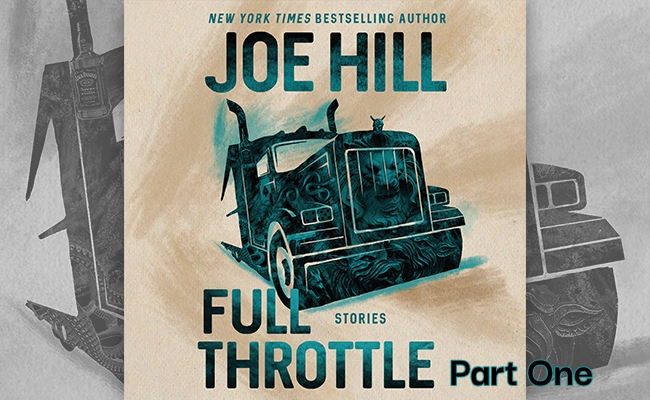 I am a huge Joe Hill fan, hence the multiple part, detailed review of his newest story collection. His graphic novel series Locke & Key is one of the most perfectly executed comic series in existence. His short story collection 20th Century Ghosts is literary, full of spark and terror, as well as a masterpiece in plot and character in every single story. The novel Heart-Shaped Box is a horror driven thrill ride that keeps the pages burning as the reader keeps them turning. This collection, Full Throttle, is Hill’s newest release in fiction and fourth collection of short stories. This story collection was somewhat wishy washy for me. I loved a lot of pieces while I really disliked others. My general observation is that the collection begins with the worst stories. Do not let this discourage you. There are some true gems in this collection, even if you have to traverse the mediocre to get to them.

Below is my breakdown of the first four stories of the book and my reactions to them:

This story originally appeared in He Is Legend: An Anthology Celebrating Richard Matheson and was written in 2009. I despised this story. I was hoping for so much more having known this story was written as a collaboration between father and son, both horror masters. This is the story of a group of bikers that have committed a horrible crime and the karma that ensues. This story is predictable and feels ripped directly from the Joy Ride move franchise. If you’ve seen those films, just skip this one. The gore for gore’s sake and predictability of what you could barely call a “twist” at the end made this story immemorable and disappointing.

This story is one that travels the spectrum of emotions. Nostalgic, disgusted, terrified. There are some images in this story, namely of carousel animals come to life, that are truly twisted. This story feels like a trip into the 1980s with a group of teenagers the summer before they go away to college. The time period is not mentioned, but Hill creates an ambience of simpler summer times. The end of the story, as it jumps forward in time, is rushed, but the images that appear to scare and thrill in this story are top notch. This piece leaves something to be desired, but is easily the best of the first three stories.

This story features Saunders, a man whose career relies on the destruction of others. As the hatchet man for Jimi coffee and making millions, he devises ways to take business from local mom and pop shops and shut them down to eliminate competition for the Jimi’s chain. When Saunders gets on the subway with a strange creature one day, he learns the meaning of karma. This story reads a bit like a gory fairy tale with a moral inside. It was very trite and predictable, which I found happening a lot in the beginning of this collection. The ending was just awful, and nothing happened that I didn’t already know would. I want to see something new from Joe Hill, as I know he’s capable of wowing with. This is not it.

“By the Silver Water of Lake Champlain”

This is the first great story in this collection. FINALLY! This is what I knew Hill could create! Hill creates character development that is complex and unspoken in many parts. He leaves enough for his readers to connect the dots in their own way and makes the events of the story ambiguous, giving the prose an unsettling air. Gail and Joel, along with their younger siblings, find a dinosaur washed up on the lake. What happens next speaks to mortality, in both humans and animals. This piece was truly fantastic. Compelling plot forwarded by the masterful prose.

Stay tuned for the second installment of Full Throttle review –