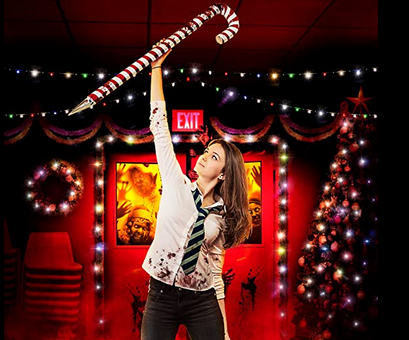 Anna and The Apocolypse

Do you need a palate cleanser from all those Hallmark Christmas movies? Me too. So I decided to watch Anna and The Apocalypse. A zombie Christmas movie. What could be better?

Oh, that’s right, this is a musical.

On the one hand, I signed up for a Christmas tree draped in guts like garlands, not Glee. On the other hand, the songs are damned catchy.

I especially love the one where zombies are killing people viciously behind the main characters while they’re bee bopping down the street with their headphones on. It felt reminiscent of Shaun of the Dead in the best way.

As night falls and the zombie army rises, our characters find themselves trapped. Anna’s at the bowling alley where she works with John, Steph and Lisa’s boyfriend, Chris. Anna’s dad is at the school with the evil headmaster, Lisa, and a group of people hoping for rescue.

Anna decides she has to get to the school to save her dad. Unfortunately, in a bowling alley filled with heavy balls and pins, the only thing the crew thinks is a good idea to bring with them is an inflatable kiddie pool.

Nick shows up with a group of idiots who are just loving this whole Apocalypse thing just in time to save everyone from a group of aging zombies while singing another catchy song. Together they fight their way across town with a series of delightfully gory zombie fights. Including a battle in a shadowy Christmas tree lot with a pointy ended candy cane yard decoration.

What follows is a rather typical zombie flick. Mind you, there’s nothing wrong with that. I for one always love the joy of watching a group of survivors getting picked off one by one. This movie ticks off all the zombie tropes. Normal people who are all of a sudden awesome fighters. Killer fight scenes with plenty of creative gore. Heroic sacrifices by people bitten. Someone has their guts ripped out while they’re still alive by a swarm. As it is a Christmas movie, we’re also treated to festive melee weapons and a zombie Santa.

Honestly, I could have done with a lot more of that and a hell of a lot less teenage drama. Because there’s a freaking lot of teenage drama in this movie. I guess the writers thought they were adding depth and likability to the characters and to a point it worked. I can’t tell you a thing about most victims of a zombie movie. But I can tell you that these kids have hopes and dreams. They want to go to art school. They want to be journalists. They want to go to Australia. But I have to feel like there’s a way to do this that doesn’t take quite so much time. Time that could have been spent zombie killing.

Even so, it’s a fun film. One that I’ll be revisiting in the holidays to come. The acting was spot on. The music was good. And everyone who deserved to be eaten by zombies got eaten by zombies.

Finally, I’ll leave you with this fun bit of trivia. In Shaun of the Dead, every character’s first name is a clue to whether they’ll live. Shaun survives, Ed is dead. You get the idea. I’ll leave it to you to see if Anna and the Apocalypse continue the tradition.