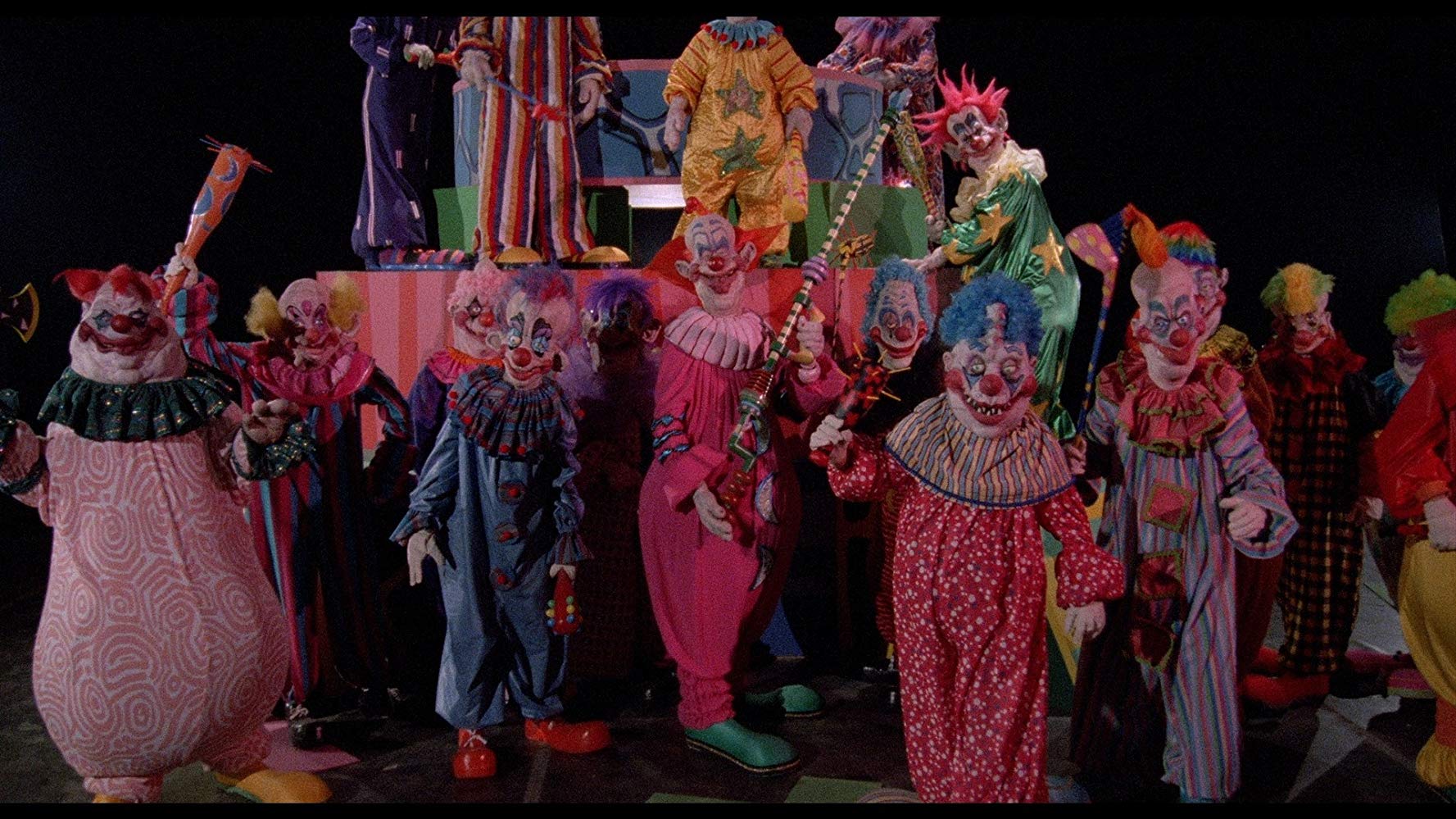 Killer Klowns from Outer Space. What happened to the whole sequel idea that was bandied about some time ago? It seems Mickey Mouse didn’t like it!

You know what? If you hate Killer Klowns from Outer Space, I’d probably hate you. Well, okay, maybe Killer Klowns isn’t worth getting into fistfights over, but it’s definitely a fun horror movie. It’s brimming with over-confidence in its overindulgence in clown-terror. The question is, what happened to the whole sequel idea that was bandied about some time ago? Well, prepare to get pissed off at that damn rat, Mickey Mouse.

It appears he ran out of room in his bloated nest for these carnivorous clowns. When the rat king purchased FOX, it messed the whole idea up. Now these Klowns are said to be permanently homeless, presumably with nowhere to go and no one to kill! That’s right: There are Killer Klowns in limbo! In fact, Disney apparently scrapped over a hundred other projects ⁠— but perhaps none as precious as The Return of the Killer Klowns from Outer Space in 3-D!

Trying to Not Hate Disney

Look, when I was in high school, I tried to appear more rebellious than I actually was. I read anarchist literature, listened to punk rock, even shopped at Hot Topic a couple of times. That changed as I got older. Now I’ve sold out a thousand times over because I need a job and whatnot. Still, I have to wonder, will Mickey Mouse ever reach a point where he says, “Okay, I’ve consumed enough of the American cultural landscape now. I’m fat enough. Time to retire in my rathole and leave the world my existing droppings to enjoy”?

Then he could perhaps stop acquiring, watering down and outright canceling so many projects. Seriously, could they not make something like a live-action Aladdin (with a weird-ass Will Smith Genie) while also having a Killer Klowns from Outer Space sequel? In fact, I publicly proclaim that, were Disney to actually allow this project — especially without totally Disneyfying its content ⁠— I would not trash talk them for a good long while.

How a Sequel Could Happen

Rather than bash Mickey Mouse, I suppose we could sweet-talk the beloved rat into freeing up the Klowns for another manic murder fest. We could pray to an altar of Mickey, Goofy, Donald Duck, etc. We can profess how enraptured we are with his superhero movies, and beg for more live-action adaptations of Aladdin, The Lion King and god knows what else (a de-contextualized remake of Song of the South?).

What are your thoughts on Disney halting the sinister tide of Killer Klown carnage (don’t worry, I avoided using another K!)? Squeak at us in the comments!

What’s In the Tall Grass?

The sweet putrid stench of love lingers through the air which can only mean one thing…Valentine’s Day and its annoying little winged cherub, Cupid, is fast approaching. Soon, partners will be spoiling one another with extravagant bouquets of roses, heartfelt Hallmark cards, obnoxiously large teddy bears, glistening diamond jewelry, and heart-shaped candies or boxes filled with assorted mediocre chocolates. You know? Normal things couples do. I tend to prefer my chocolate boxes filled with bleeding hearts, à la ‘My Bloody Valentine’ but, beggars can’t be choosers, right? All jokes aside, Valentine’s Day is special for many couples, however, there are also many others who find themselves celebrating this day without a significant other. Luckily, Shudder, along with drive-in king Joe Bob Briggs and co-host Darcy the Mail Girl (Diana Prince) will graciously be keeping us lonely mutants’, and yes, all you horror fanatic couples’ company on Friday, February 10th as they return with The Last Drive-In: Joe Bob’s Vicious Vegas Valentine, premiering live at 9pm EST.

We're headed to Vegas for the Mutant Wedding of the Century! Joe Bob's Vicious Vegas Valentine. . . . Friday the 10th 9pm . . . And you will not BELIEVE what movie the happy couple has approved for the wedding itself! #twistedlove #thelastdrivein pic.twitter.com/buzOvGkytI