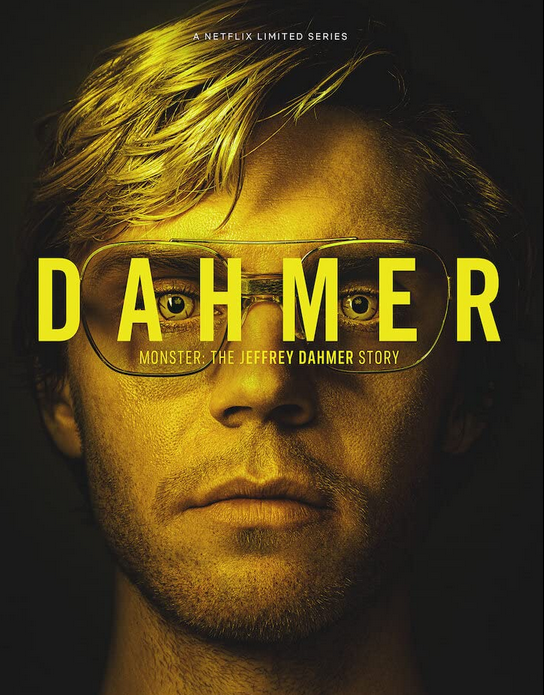 I know it’s been a while since we discussed Dahmer. But in watching the rest of the season, I found that I couldn’t let it go. There is so much to explore in this season, so much amazing work that needs to be appreciated, that we just have to go back to it.

Episode two begins at Dahmer’s apartment right after he was arrested. The neighborhood watches in terror as barrels of body parts in various stages of decomposition are removed from his apartment. Meanwhile, Jeffrey himself is going through processing. He waives his right to an attorney but asks if the police can call his dad.

This prompts a flashback to Jeffrey’s childhood. His parents had a turbulent marriage. His mother was abusing the medication, and his dad didn’t seem to know how to deal with that besides yelling. Eventually Jeffrey and his dad bond over finding road kill and taking it apart.

They could have taken a cooking class together, or maybe tried softball. But I guess this works too.

As a young man just out of the service, Jeffrey finds himself lost. He moves home for a time, living with his grandmother. This ends when he falls in love with, and consequently steals a store mannequin.

This brings us to maybe the worst scene of the whole episode. A slightly older Dahmer, looking for companionship, brings a young boy home with him. He drugs the boy but apparently doesn’t give him a high enough dose. The boy gets out of the apartment and finds Glenda Cleveland, played by Niecy Nash. Well, he doesn’t find her so much as she and her daughter find him. She calls the police, trying to get help for the child she just found running around almost naked in the streets.

Of course, the police don’t care. Dahmer shows up just in time to explain that this child isn’t a child. He’s a grown man and Dahmer’s boyfriend. Can’t he just take him upstairs?

And not wanting to involve themselves, the cops take him at his word, and leave.

The episode ends with the very real phone call Glenda Cleveland made to the police a few days later. She was concerned about the boy, and she was the only one who was. Because the police told her it was just a boyfriend, boyfriend thing.

Well, it wasn’t. It was a serial killer, victim thing.

Unlike another recent Ryan Murphy project I could mention, Dahmer is sticking as close to the true story as possible. This means some of the more horrific details, like the cops returning one of his victims to him, are absolutely true.

I cannot wait to watch the rest of Dahmer. From what I’ve seen so far, the copious awards Dahmer has received are well deserved.

Related Topics:DahmerNetflixtrue crime
Up Next

All Jacked Up and Full of Worms – Review

The sweet putrid stench of love lingers through the air which can only mean one thing…Valentine’s Day and its annoying little winged cherub, Cupid, is fast approaching. Soon, partners will be spoiling one another with extravagant bouquets of roses, heartfelt Hallmark cards, obnoxiously large teddy bears, glistening diamond jewelry, and heart-shaped candies or boxes filled with assorted mediocre chocolates. You know? Normal things couples do. I tend to prefer my chocolate boxes filled with bleeding hearts, à la ‘My Bloody Valentine’ but, beggars can’t be choosers, right? All jokes aside, Valentine’s Day is special for many couples, however, there are also many others who find themselves celebrating this day without a significant other. Luckily, Shudder, along with drive-in king Joe Bob Briggs and co-host Darcy the Mail Girl (Diana Prince) will graciously be keeping us lonely mutants’, and yes, all you horror fanatic couples’ company on Friday, February 10th as they return with The Last Drive-In: Joe Bob’s Vicious Vegas Valentine, premiering live at 9pm EST.

We're headed to Vegas for the Mutant Wedding of the Century! Joe Bob's Vicious Vegas Valentine. . . . Friday the 10th 9pm . . . And you will not BELIEVE what movie the happy couple has approved for the wedding itself! #twistedlove #thelastdrivein pic.twitter.com/buzOvGkytI