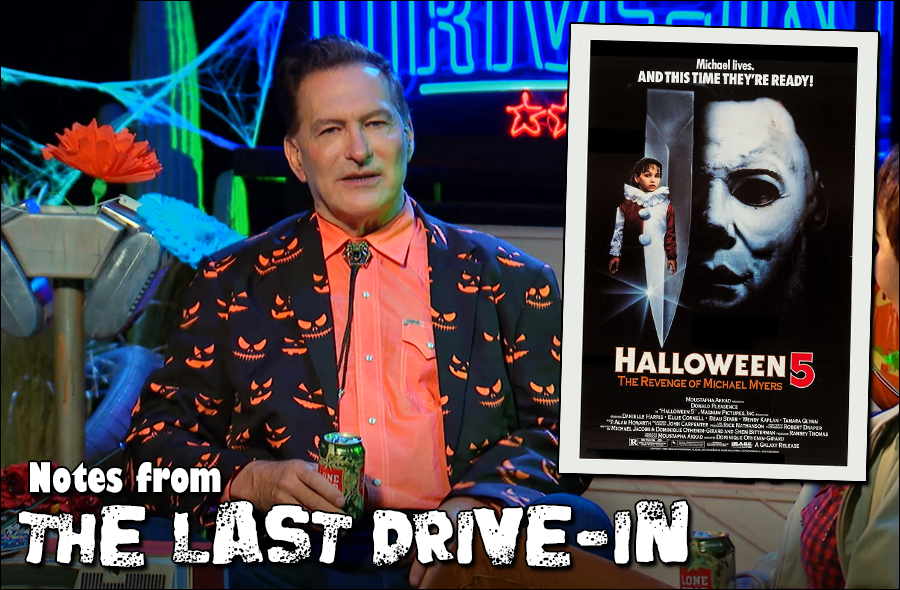 The final film of the night is Halloween 5 and… oh boy.

Before we dive into the background information of the film, we need to address the huge, stinky elephant in the room. Joe Bob Briggs, the papa of the whole damn mutant family, gave Halloween 5 the four-star treatment. Yes, Halloween 5 is a four-star film for The Last Drive-In.

Halloween 5 released about a year after the release of Halloween 4. That turnaround alone should be bad news, even for a lower budget horror film. This is a movie that in many ways is threadbare at the elbows narratively and regarding production values. The Return of Michael Myers, at least, look nice and have some rather impressive visuals on a passable story. The Revenge of Michael Myers? Not so much.

Swiss director Dominique Othenin-Girard also served as a co-writer to the film. We also have Michael Jacobs and Shem Bitterman to blame as well. The film brings back Donald Pleasence as Dr. Loomis and Danielle Harris returns to reprise her role as Jamie Lloyd, the daughter of the now-dead Laurie Strode.

The film follows Myers, returning to Haddonfield again to track down and destroy Jamie (at least, maybe that is what he is after, he sort of wanders around picking off teenagers in not-so-interesting ways.

The film is, to this date, the lowest grossing film in the series and the most critically savaged, with the exception of 2002’s Halloween: Resurrection. We don’t call Halloween III: Season of the Witch, here, because it is not part of the Myers story line, and it also was a far better film than 5 or Resurrection.

Perhaps the most damning thing I can show you to illustrate just how off the rails this series became is the following:

Michael Myers, in an ill-fitting mask, in complete daylight, standing not-so-menacingly in a closet. Keep in mind that she had just pulled something out from that closet. It’s almost like a parody of the iconic closet scene in the original Halloween.

There is not a whole lot I can recommend regarding Halloween 5. Even as someone who deeply loves the icon that is Michael Myers. Halloween 5 is just bad, bad, bad. I cannot, in good conscious, award it anything higher than a one-star rating. It completely abandons a potentially fascinating ending of 4.

Instead of Jamie being the next Michael Myers, which would have been an interesting direction, she merely attempted to murder her step-mom. Loomis’ obsession with Michael goes above the pale, resulting in many scenes of Donald Pleasence screaming at children. It also ultimately betrays the character of Loomis by choosing to have him use a child as bait for Michael.

Let’s not even get into the fact the most of the kills are boring, which is absolutely sinful for a slasher. Michael doesn’t even wear the iconic mask for a portion of the film. This movie is just a misfire on a whole different level. It even attempts to paint Michael as vulnerable in a moment where his niece reaches out to him, which is an absolutely foolish direction to go.

Looking for the Haunted MTL Drive-In totals? You can find those on the review of the first movie of the night.

With that being said… we have to leave the Drive-In, but let’s keep the lights on for the next marathon… in December!

Alter: Your Destination for Horror Stories