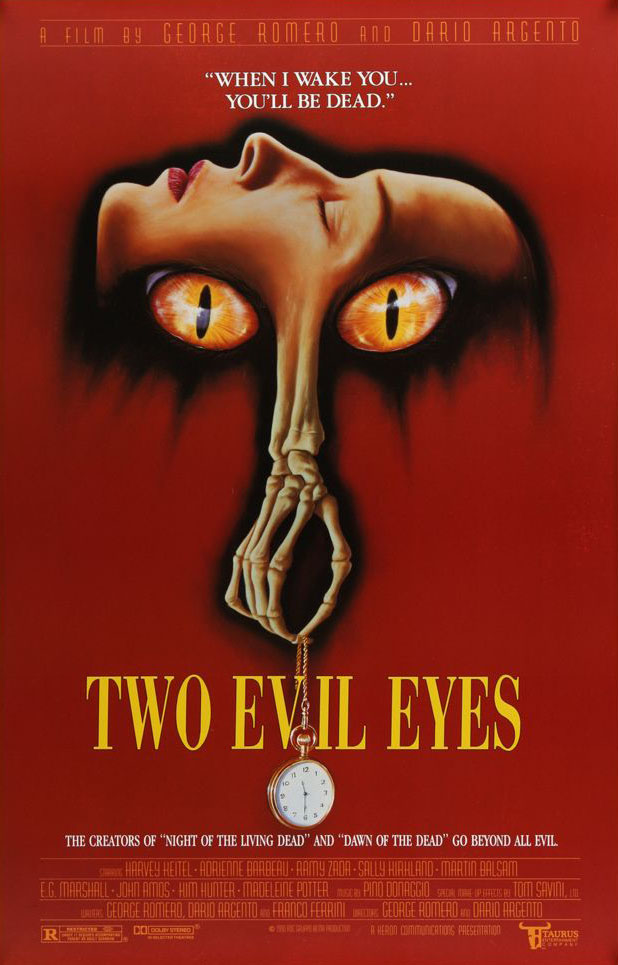 Two Evil Eyes. This Italian-American horror twofer sees another team-up between George A. Romero and Dario Argento. Their creative goal, apparently, was to add their own unique voices to two classic Edgar Alan Poe tales. They definitely accomplished that, as the film is split between Romero’s more classic, nuanced style and Argento’s decidedly more manic, crass, and outwardly violent approach. Don’t get me wrong here: Romero’s movies are often very violent indeed. Still, Argento somehow has a more vicious style. In this case, I’d say much of that is actually carried by the whirlwind performance of Harvey Keitel.

Harvey Keitel’s performance as Rod Usher really makes “The Black Cat” tick as a story. Because of his strong, commanding presence, it almost not only ceases being just a Poe tale, but also something beyond a typical Argento movie. It’s difficult to overstate that, of all Dario Argento’s actors I’ve seen, Keitel might be at the top of the pile. The end result is that, as the story progresses, you might get a sense of the character’s madness, understanding his bizarre frustrations and destructive nature.

When a horror movie puts you inside the character’s mindsets and lets you feel uncomfortable truths, you’ve really got something. You might be tempted to take points away from “The Black Cat” for this reason or that, but I doubt his performance would be one of them. This story also stars Madeleine Potter, John Amos, and is apparently the first acting role for Julie Benz, who played Dexter’s wife on that Showtime series.

The Facts in the Case of Mr. Valdemar

How about George A. Romero’s take on a classic Poe tale? Well, I would say Romero better conveys the classic Edgar Alan Poe mood throughout his piece. In fact, this part of Two Evil Eyes is superior overall to Argento’s (although, again, Keitel’s performance is pretty damn good). Then again, it’s possible my preference for this story is biased in favor of nostalgia. If you look at the casting here, Romero went with plenty of people involved in the original Creepshow movie.

You have Adrienne Barbeau as Jessica Valdemar, the wife of the soon-to-be-deceased Ernest Valdemar. Well, Ernest Valdemar is played by Bingo O’Malley. Both of them appear in Creepshow. You also have E.G. Marshall as Steven Pike, Ernest’s lawyer. Of course, Marshall also appeared in Creepshow, as Tom Atkins, who plays Detective Grogan in this story.

However, I assure you my appreciation of this tale isn’t just because it’s a partial “Creepshow” reunion. I just think it’s pretty well done. In the story, Jessica Valdemar and her lover (Ramy Zada), Dr. Hoffman, launch an ingenious scheme involving hypnosis to wrest a fortune out of Mr. Valdemar. It ends up being a strange and twisted tale involving the afterlife and the soul’s connection to the body.

Oddly enough, I like this tale well enough, but I actually think it could have been more subtly done. I think that would be my main complaint about it. That being said, it is a solid story overall, even if I don’t place in in the upper echelon of horror cinema. I guess that’s what I’d say about Two Evil Eyes in general. It may not be everything it could have been, but it still delivers on some key points. Also, there’s no way I could have done much better if I were a filmmaker. So give this movie a chance, because it’s a little better than some might expect.

Have you seen Two Evil Eyes? Is it a decent presentation of Edgar Alan Poe? Let us know in the comments!

Behind You is entertaining but forgettable