The cruiser screamed past the corner where they had paused. Dani had no way of knowing if the driver had seen her group, but she felt uncomfortable about someone knowing where she was… someone she didn’t know.

The moans behind them had grown louder. Edgar had slowed to a crawl at this point to keep the ghouls on the car. Now the car was practically swarmed. Dani couldn’t make out how many ghouls had begun to scramble over the surface. All she saw was a tangle of gooey, flailing limbs.

Bob was rattling the chains that held the gate shut. “Hey Jim, what the hell was that? Was that a fuckin’ cop car?”

Jimmy stood at the cart, his knuckles white from his grip on the bar. Bob was still fumbling with the lock and chain.

“Yeah, guy buzzed us twice, and we’re pulling deadies. We gotta get Edgar in quickly with the car.”

The chain came loose, and the gate began to open slowly. Jimmy stepped away from the cart and pulled hard to assist Bob. Dani had already rolled her cart inside and to the right, just past Sandy.

“Where’s the car? Did you lose the car?” she asked.

Dani rolled the cart forward and ran back to the gate, pushing Jimmy’s cart in as he finished moving the gate back. Sandy had approached and glanced out toward the street, looking worried.

Jimmy snapped, “it’s coming along with a dozen of those dead fucks.”

Sandy glared at him for a second and then took several steps back, creating distance between herself and the gate.

Dani stepped back out onto the sidewalk and waved down Edgar. He accelerated slightly, shaking loose a group of the ghouls, who tumbled onto the ground like wet sacks of meat. Edgar turned the Cadillac to drive into the storage facility, but Dani stepped right in front of him, slapping the car’s hood.

She glanced at the two groups rounding the corner and approaching them.

“Ed… you gotta lead them away.”

Edgar threw his heavy frame through the driver’s side window and glared at her. “What? You’re kidding…”

Dani shook her head and slapped the hood again, pointing at the growing crowd. “That cruiser screwed us. There are too many for this gate.”

Edgar grunted and then slapped the roof of the car. “Shit. Fine. Stay low.”

He reversed the car and began the slow drive down the road. Dani dashed back past the gate and helped Jimmy slam it shut. She threw on the chain and closed the padlock.

Dani and Jimmy stood away from the gate. Jimmy turned to Sandy and Bob and gestured at them to stay quiet.

The ghouls began to pass in front of the gate as they followed the car. The gate, thankfully, had a green screen of woven plastic fiber to keep the group out of sight.

A couple of the ghouls, the closest ones, had slapped and rattled the gate, but the distant sound of Edgar’s horn pulled them away.

The wait was tense. The last of the ghouls, the ones from the second group, had finally wandered by after what seemed like about forty minutes.

Sandy was the first to say anything. “They’re gone, now, right?”

Bob was sitting in a lawn chair a few units down, reading a book. Jimmy paced back and forth between periodically unloading goods from the shopping carts. All the while Dani had been at the fence, breathlessly observing the horde of ghouls in silence. Their movements were clear, even seen obscured by the green fabric – jerky, uncoordinated, unnatural.

Dani had lost track of time. The ghouls were long gone except for a few stragglers along the street. There was no sign of Edgar, Mary, and Alicia last time she had climbed up to the roof of a row of units. She was worried.

She had found another lawn chair and set it up near the gate. Jimmy was still messing with supplies, arranging them into different piles and groups. Bob continued to read. Sandy had wandered off to another unit and was going through boxes of clothing.

The sound of an approaching car echoed in the concrete canyon of the U-Stor-It. Dani rose to her feet and peeked out through a small gap between the fence and gate, and saw the white Cadillac.

Jimmy had already dashed away from his piles of supplies and unwrapping the chain from the gate. She helped him slide the gate open.

The car rolled in, stained with grimy, bloody marks from ghoulish hands, but all the passengers intact. Dani felt a sense of relief but lost that the moment she spied a group of the approaching undead. It seemed to be about ten or so.

Dani pushed the rolling gate with all her strength as Jimmy pulled at it. Within moments the gate rattled shut against the pole, and Jimmy looped the chain around it as quickly as possible, slamming the padlock shut.

Dani and Jimmy both stumbled back as the first crash of the ghouls smashed against the fence, rattling it. Torn fingers wrapped around the exposed metal rods, and through the green woven plastic dark red blotches spread unevenly across the surface.

In moments, gore had washed over the green cover with a sickly brown color.

Bob was already helping Mary out of the car into his golf cart. Each of her steps was labored. Sandy stood by awkwardly, not helping, as was her typical state.

Alicia came stumbling out of the back seat and moved close to her mother. Dani noticed a slight sneer on Sandy’s face, no doubt annoyed and having strangers in her midst again. And a child no less, Dani thought in mock horror.

Dani felt Jimmy grab her hand and pull her to the side, away from the gate and into one of the open units. She glanced at him, and he nodded toward the Cadillac, which Edgar began wheeling into position in front of the gate, backing into the unit. He retracted his hand quickly.

After the car was parked in front of the gate, Edgar stepped out, his gun wedged into the band of his pants. Dani walked out of the unit and gave him a knowing look. Jimmy followed along. Edgar shrugged and handed the gun over.

“Sorry… must have slipped my mind that I had it on me.”

Dani smirked. Edgar smiled back. She turned to Jimmy, who looked nervous, still.

She tucked the gun into the back of her pants and walked toward Bob and Mary in the cart. The moans of the ghouls were heavy in the air.

END of PART ONE 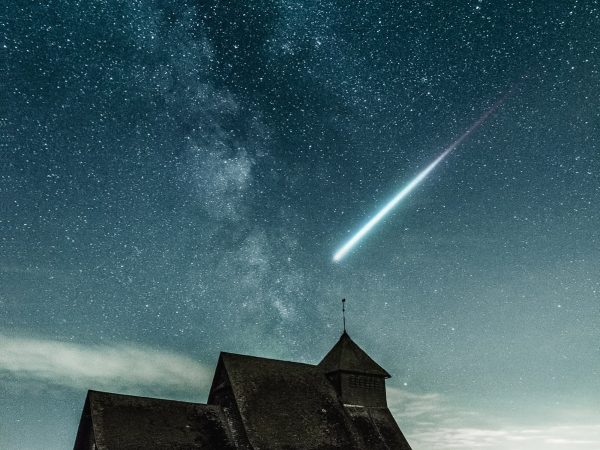