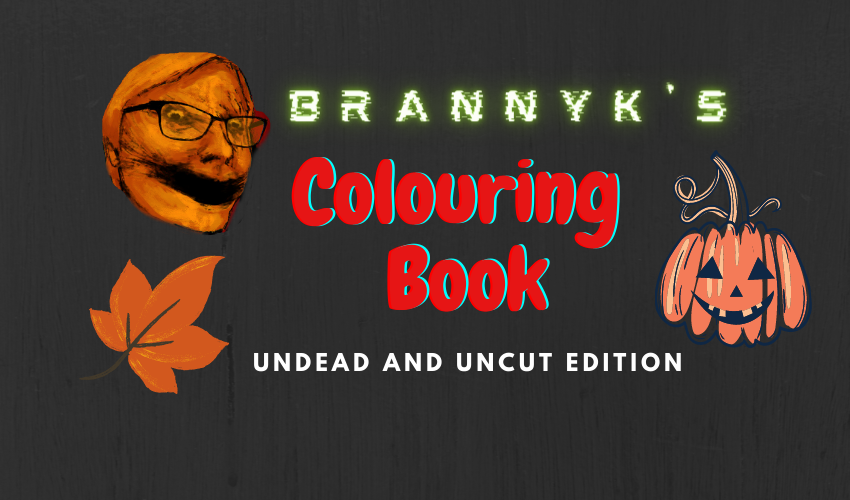 So, in order to help people get in the Halloween spirit and also get some people fed by donating for each listen to the Ottawa Food Bank, the crew at HauntedMTL got together one dark and drunken- I mean spooky night and created Undead and Uncut – Live!.

But maybe you’d like an activity to follow along at home with. Maybe you’re one of those who likes to be apart something bigger, like a horror family or whatever.

Well, don’t lose your pretty heads, I’ve got it. Here is the first installment of my annual colouring book pictures for you to print out and enjoy colouring for hours. Hours. I’m watching you, so you better enjoy the crap out of it…also dust your house more. It’s an allergy death-trap.

These are a few snippets and highlights. Go over to our Podcast page (or just like….click here) for the whole story! So…spoilers.

So, launching us off was Nicole C. Luttrell:

I apparently get too gross…

Enjoy with all your friends! Colour with your kids! Put on Nana’s fridge! These are in style and context the whole year round!

Warning, make sure you read PART 1 and PART 2 before continuing…

The jelly began to ooze silvery pus, puddling in strange beads like mercury from a broken thermometer over the surface of the mud where the tentacle had fingered its way out of the grime.  The bubbles seemed to emerge from within of their own accord, gathering around the swollen gleaming surface.

Frankie started howling and stared at me with wide-open eyes, his finger beginning to blister and swell rapidly.  Veins of silvery black traced beneath his skin from his fingertip towards his hand and wrist.  No sense in calling him stupid now, the situation had progressed beyond a casual jab and had begun to be genuinely alarming.

“Do you really think it’ll fall off?” he cried, falling to his knees and staring at his hand in disbelief.

I was starting not to be so sure, wishing I’d never made such a flippant comment.  The black silvery tendrils spreading beneath the skin’s surface continued to thread and fan out but had slowed somewhat, pooling in necrotic-looking lumps.  His fingertip was wholly black and had started to dry out, as if it was turning to charcoal and might flake off with any sudden movement.

The houseboat was a good ways off, yawning lazily as always, leering at us from afar like a fleck on the far side of the lake.  My bicycle stood sentry over my brother’s, which had sunk into the mud and would require more effort than it was worth to pull out, especially given the change in circumstances.  Frankie didn’t seem capable of riding back anyway.

I glanced back towards the jelly, perhaps hoping to find some sign of what was happening or anything logical or sensical that I could grasp on to, to tell me what was going on.  It just pulsed there, continuing to ooze silvery pus as the tentacle shrank its way back into the grime, either being slurped back into the mud or spilling forth its contents to the surface.  The silver beads began to move independently, congregating and trickling towards us.

Frankie trembled and continued to howl, eyes wide begging me to do something.  Anything.

I tore off my shirt and wrapped it around his hand and wrist snugly, scooping him up.  I had no idea what his finger or hand looked like in its wrapping but I knew I needed to get him back to some kind of civilization…  Immediately.

Frankie clamped around my neck, his grip tightening like a trap that had been sprung.  I raced back to my bicycle, my little brother in tow.  Together, we awkwardly mounted my bicycle and wobbily sped out of the mud pit towards what had once been the shore of the lake, leaving his bicycle sinking in the grime.

Don’t start this before you read part one!

God, how I wish they didn’t exist.

Frankie was way ahead of me on the road. How the heat didn’t bother him was beyond me. Some part of childhood magic I’ve already lost.

“Slow down!” I yelled, trying to get my rusty bike to keep up with him.

I could smell the remains of the lake around us. The good things had gone, but that awful stench remained. Dead fish, rotting lake weeds.

Frankie hit his breaks without warning and dropped his bike.

“Hey!” I called. He’d dropped his bike in the mud, and for sure that would be my fault when our folks saw. But he wasn’t listening. He was instead running off towards something he’d seen sticking out of the mud.

Anything he did I was going to get in trouble for. So I propped my bike next to his and took off after him.

By the time I caught up with Frankie he was crouching down, looking at something. “Check it out,” he said.

I bent down to look. Something was coming out of the ground, alright. But I had no idea what it was.

If we’d been near the ocean, it would have made more sense. The closest thing I could compare it to was a jellyfish.

“A long jellyfish,” I supplied helpfully. And Frankie just nodded. It had that consistency of a jelly but stretched out like a tentacle. It was so clear we could nearly see the mud beneath it. I wondered how Frankie had even seen the damned thing from so far away. Whatever it was, we could only see part of it.

“I wonder how big it is,” Frankie said. He looked around us, found a stick, and started digging near the thing.

“What are you talking about? It’s not alive, look.” Frankie gave the jelly a gentle poke with his stick. It didn’t indicate that it had been touched at all. Still, though, I felt like it was alive. And that I didn’t want to be anywhere near it.

He pointed. The spot where he’d touched the jelly seemed to have broken open. Something silver was leaking from it, shimmering in the sunlight. Where had it even come from? The jelly didn’t seem to have any veins as far as I could see.

My brother, ever the ten-year-old boy, reached out and poked the silver liquid with his finger before I even had time to call him stupid. But he pulled back quickly, yelping in pain. “It burns!” he cried, as he rubbed his finger in the mud to clean it off.

“It’s probably some old chemicals,” I muttered. Pollution had always been a sensible explanation for why the lake had dried up. “Come on, let’s go find a sink and wash your hands before they fall off.”

The first chapter of our exquisite corpse summer series.

My family has this summer tradition where we rent a houseboat and live in it for three months. The boat lives off a dock on Crawdad Lake, located in the middle of a little town called Isadora, about three hours from our hometown. This was fun when I was growing up; we would go fishing and exploring, dive into the water and snorkel around. But now I’m 17 years old, can barely fit in the twin bed designed for children aged 6-10 and I have to share a tiny space for 90 days with my parents and little brother. What’s worse is all the water in the lake has been dried up for four years and there is virtually nothing to do here anymore.

Isadora used to be a tourist town. It used to be filled with little shops and restaurants, my favorite of which was a little sandwich bar that had everything a boy could dream up. We used to get massive sandwiches then eat them on the shore, the sun in our eyes and our stomaches as full as can be.

Crawdad Lake was a beautiful until it wasn’t. Now it’s miles and miles of dirt, a big hole with nothing in it but rocks and the carcasses of dead lake animals. The boat literally lives on a pitiful pile of dirt and rocks.

The first year the lake dried out, everyone behaved as if nothing changed. But playing pretend can only last for so long, and all the businesses ended up either moving locations or closing for good. Residents of Isadora packed up their bags and moved away. Longtime tourists stopped visiting, and the landlords who relied on tourism ended up foreclosing.

In the blink of an eye, Isadora was a ghost town and not even that could change my parents’ mind about living in this awful boat. All I wanted to do today was stay in bed. I downloaded a few movies on my iPod before we left for the trip, so I was craving to be underneath the fan with some of my favorite actors. But of course, today is the day my little brother decides he wants to explore the lake and find “lake monsters” (his words, not mine). Since my parents don’t wanna take him, I’m stuck babysitting and now we’re riding our bikes across Crawdad Lake under the baking hot sun in search of things that don’t exist.