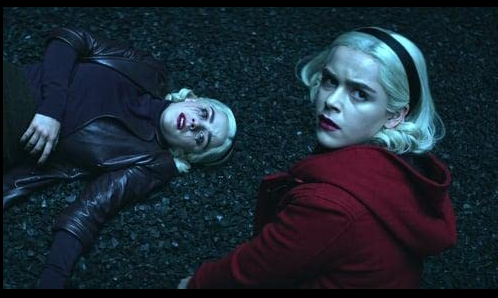 Season four of Chilling Adventures of Sabrina starts with a shadow

Season four of Netflix’s The Chilling Adventures of Sabrina started pretty much exactly how I thought it would. The main character continues to be a selfish pain in the ass who, it seems, will never get what’s coming to her.

The episode starts with everything seemingly fine. The crew is recovered from the horrors of the Green Man and pagans almost killing the whole town. It’s almost like that wasn’t a horrifying experience that would leave any normal person reeling and in need of psychiatric help. But everyone seems fine. Ros and Harvey are doing great together. As are Theo and Robin.

Thank goodness, Ros sees right through this and calls her on it. Before Sabrina can let her selfishness endanger anyone.

Father Blackwood has called on an ancient menace called The Eldridge Terrors to destroy the Spellmans and the whole world. The first Terror, The Darkness, has set miners to darken the town.

To defeat The Darkness, Sabrina Spellman has to call up Sabrina Morningstar to call forth hellfire. This is, of course, after Cousin Ambrose fully explains that spending time together might break up the entire universe.

For once, even the two of them together weren’t enough to destroy The Darkness. The entire coven had to come to their aid and call up Hecate to dispel it.

Of course, this isn’t enough to make it clear to Sabrina that spending time with, well, herself, was a bad idea. Time will only tell if she ever learns a lesson from, once again, being as selfish as humanly or witchly possible.

Sabrina’s a pain in the ass, but as usual, the rest of the cast is the reason to watch. Cousin Ambrose and Salem hanging out is great, especially when you know they’re two parts of the same original character. Prudence and Aunt Zelda continue to be freaking badass queens, as does Ros.

And, of course, I love the addition of Mama Marie. Even if, sadly, the actress has the worst Cajan accent I’ve ever heard in my life.

All that being said, I’m looking forward to the rest of the final season. Here’s hoping Sabrina gets what’s coming to her, without too much of a body count.

Sabrina episode two, the one with two weddings.

‘Relic’ review: A unique take on the haunted house story