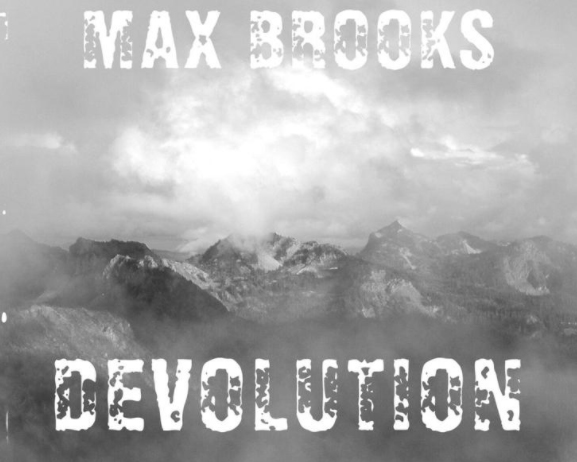 So why is Devolution a gift you would only get your worst enemies, or at least the annoying coworker whose name you got for Secret Santa this year?

At this point you may be panicking because the presents you bought over Labor Day still haven’t arrived yet and you’re just about willing to brave the closest COVID-infested mall to acquire some last minute gifts.  I’m not here to tell you not to go out and risk your life for some last minute fuzzy socks (but seriously, don’t).  I’m here to tell you what you shouldn’t waste your money on, and that’s Max Brooks relatively new book Devolution: A Firsthand Account of the Rainier Sasquatch Massacre, about a bunch of millennial hippies tangling it up with bigfoot (bigfoots? bigfeet?) in the Pacific Northwest.

But wait, isn’t Max Brooks that the son of Mel Brooks who wrote the highly entertaining The Zombie Survival Guide and World War Z?  Yes, he is.  But I would point out he also wrote the screenplay for The Great Wall starring Matt Damon, so let’s not act like his writing past isn’t at least a little bit sorted.  So why is Devolution a gift you would only get your worst enemies, or at least the annoying coworker whose name you got for Secret Santa this year?  Well, let’s just say this book is a bit lacking; as in, lacking plot, characterization, sense, or any kind of suspense.

Let me explain… No, there is too much. Let me sum up.

Devolution is formatted in a rambling series of journal entries, fictional interviews that may or may not have anything to do what’s going on in the main storyline, and bland excerpts on the behaviors of chimpanzees in the wild, which is what Brooks apparently thinks bigfoot are.

Our main character who’s journal we follow is Kate Holland- a complete doormat who does whatever she’s told, never questions anything, and who’s main skill set seems to be using a phone app to count calories.  With her is her husband Dan, who I think may have been a zombie with how little personality or presence he had.

Katie and Dan have just moved to a purposely cut off from the world small wilderness eco-friendly village of Greenloop near Mount Rainier. And here’s where the problem comes in, because Greenloop is populated by nothing but clueless liberal stereotype characters.  There’s the lesbian couple with their non-speaking foreign adopted daughter, the fat college professor who thinks he knows everything, the rich tech start up guy and his vegan yoga instructor wife, and the oddball glass artist war refugee lady who everyone thinks is a little crazy because she’s the only one with any sort of survival skills whatsoever.  There might have been more, but in the end none of them really mattered as characters because they were merely shallow sitcom stereotypes of what Fox News would call liberal elites.

The gist of Katie’s story is that, almost as soon as she and Dan move Greenloop, Mount Rainier erupts, causing mudslides that cut off Greenloop from the outside world or from any escape by the residents.  That’s when things start going downhill, and boy do they go downhill FAST. I should point out that the course of the entire story takes place over approximately two weeks.  Not two months, or even two years, two WEEKS.  Because that’s how fast a bunch of liberal elites would fall apart if left of their own, according to the author anyway.

Almost immediately people are panicking about rationing food, how long before they might get rescued, whether or not they can host their yoga classes, etc.  And of course they have no emergency supplies because, why would they?  At one point Katie even points out that there isn’t a hammer in the whole village.  I mean, really?  Really?

“How many people in L.A. have earthquake kits?  How many Midwesterners are ready for tornadoes or northeasterners for blizzards?  How many Gulf Coast residents stock up for hurricane season?” – PAGE 79

If you’re wondering where bigfoot fits into all this, so was I for over half the book.  In fact, you could probably just skip the entire first half of the book and not really miss out on much.  Bigfoot does eventually show, and then immediately proceeds to go on a murderous rampage with some sort of loosey-goosey survival of the fittest trite thrown in for good measure.

Considering how clueless and inept these people are, you can pretty much guess what happens.  There’s no real satisfaction in watching them band together because it’s like giving a group of babies pencils and telling them to defend themselves against a rabid dog. Only in the babies case, you can sort of forgive them for being so helpless and inexperienced.

The very bottom line.  Like, it’s way down there.

If Max Brooks was trying to make some kind of point with this book about how technology is making us all soft, he failed spectacularly.  Instead he’s written a book about some unbelievably stupid characters that mostly get eaten by giant chimpanzee due to their own incompetence.  So much of this book just felt lazy in the extreme, from the setup to the timeline to the depictions of a historic cryptid.  It’s kind of telling when the most interesting parts of the book were actually excerpts from Teddy Roosevelt’s 1923 book The Wildness Hunter about bigfoot.

If this had been a book about some average people that were trapped in the middle of a natural disaster with bigfoot, imagine how great that would have been.  Unfortunately, that’s not this book.  One out of five Cthulhu.  You’re probably better off watching Suburban Sasquatch and having a laugh.