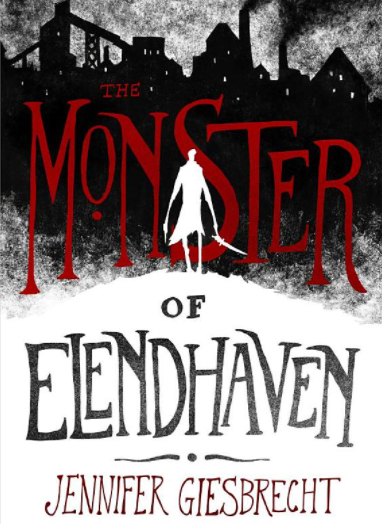 You know how sometimes you need a story that reflects the darkness of a cold sunless winter day? A story so covered in gritty loathsomeness that it’s devoid of all hope and light?  A story that doesn’t just wallow in darkness, but embraces it like a long dead lover?  I’ve got just the book you’re looking for to curl up with on those bleak winter nights.

The Monster of Elendhaven is a masterwork in dark gothic fantasy by Shirley Jackson award nominated debut author Jennifer Giesbrecht.  A wonderfully lush and gruesome fairy tale with Poe overtones and a little old gods from the deep Lovecraftian sensibility thrown in for good measure.  The main characters are monsters of different sorts that are irrevocably drawn together by forces unknown.  Odds are, even as twisted and sick as they are, you’ll fall in love with Elendhaven’s monsters just as surely as they fall in love/hate with each other.

The plot and the plotting.

Hundreds of years ago the North Pole was ripped asunder by dark magic.  Five centuries later, nestled in the black poisoned waters of the northern polar sea, the polluted city of Elendhaven metastasizes.  This is where the creature Johann was… born?  Created?  Or perhaps spawned is a more proper term.  For Johann is far more than a mere man.  He is a monster; birthed on the sharp rocks at the edge of the freezing tainted sea and lives and hunts in Elendhaven’s soot-covered shadows.  His only impulse, to survive and to kill. Both of which he does extremely well.

That is until Johann meets (okay, stalks and then tries to kill) one Florian Leickenbloom, a fine young upstanding member of the community who also happens to be an illegal magician with a cryptic and macabre past.  This meeting will change both their lives, intertwining them in ways unexpected and unforeseen.  Florian’s grim past leaves him craving revenge, and Johann may be the one person who is able to give it to him.  The world would be wise to beware.

Never was a story of more woe than this of the monster Johann and his dandy Florian.

If you’re wondering whether or not this is a love story, it definitely isn’t.  Although, it still gets a bloody LGBTQ stamp of approval, especially if you like your LGBTQ characters a little more on the twisted side.  It’s a story of obsession, revenge, and maybe just a touch of destiny.  It’s weird, wild, bloody, grim, darkly humorous in spots and brutally sadistic in others.  Giesbrecht’s lyrical prose puts you on the grime covered streets of Elendhaven stalking prey alongside its human and inhuman monsters, and for a brief 159 pages you can become totally immersed in the wretched industrial city reminiscent of a frozen version of Jack the Ripper’s London.  Possibly one of the best books I’ve had the pleasure of reading this year and definitely worth a look.