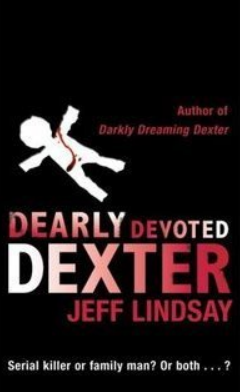 Digging into the second Dexter Novel

After reading Darkly Dreaming Dexter, and then being betrayed on a personal level by the ending of Dexter New Blood, I was excited beyond words to find out that there was a whole series of Dexter novels. And so I jumped into book two, Dearly Devoted Dexter, with great expectations.

I was not disappointed.

Dearly Devoted Dexter was published in 2005 by Doubleday, coming just a year after the first. There is nothing, or at least very little in this book that resembles season two of the show. The only real thing they have in common is that our anti-hero Dexter is being tailed by his nemesis, Sargent Doakes.

Doakes is tailing him night and day, keeping Dexter from finding playmates to enjoy the moonlight with. And so, to keep under his radar, Dexter starts spending more and more time with Rita, Cody, and Astor. He develops a taste for light beer and playing kick the can with the kids.

Meanwhile, another killer arrives on the Miami scene. He has a taste not for light beer, but for creating horrific inhuman flesh sacks out of his victims. The description of these poor creatures is exquisitely gruesome. This killer takes off body parts, one by one, leaving the victim alive. Dexter at first mistakes the horrific sounds one victim is making for a screaming dog.

Distracted by playing house, Dexter isn’t interested in this case until Deb’s boyfriend is abducted. He soon puts together that the killer and boyfriend were both part of a black ops team in South America. If you guessed that Doakes was also in that black ops team, you are right on the money. Soon, Doakes is abducted as well.

This book was equal parts fascinating and amusing. I love Dexter’s internal voice. I also love that he’s a lot more selfish than he ever wants in the books. Left to his own devices, he would do his job as a blood splatter analyst, eat wonderful Cuban sandwiches, and find playmates to dice up under the cover of darkness. But Deb isn’t about to let that happen. And, after accidentally leaving a diamond ring in his pocket, Rita isn’t going to let that happen either.

I’ve never seen an accidental proposal before. But now that I have, I approve.

If you haven’t read Dearly Devoted Dexter, I can’t recommend it enough. It’s bloody, it’s fun, and it’s a great way to kill a cozy evening at home.

If you want to read Dearly Devoted Dexter, you can get a copy now on Amazon.

I have No Mouth, and I Must Scream, A Collection Review