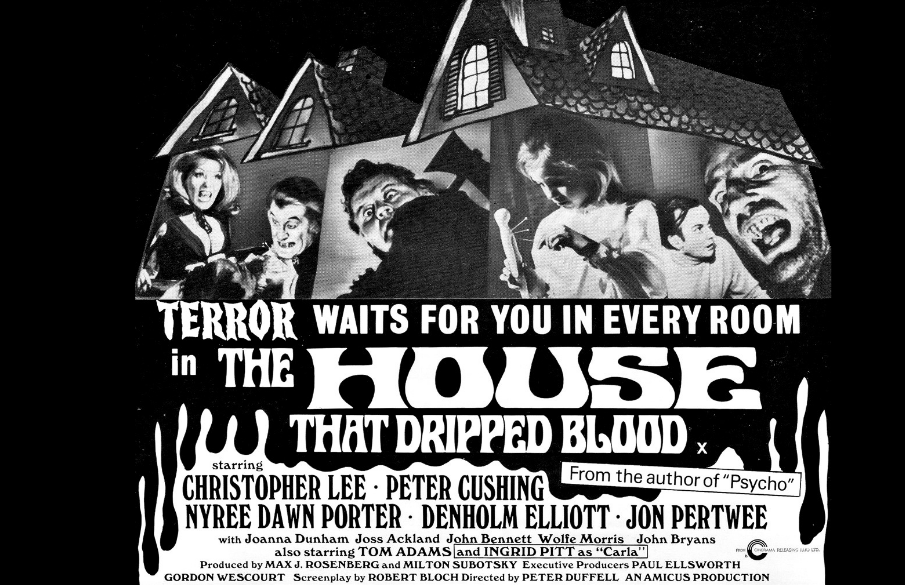 ‘The House That Dripped Blood’ Has Far Less Blood Than Expected…Even With Vampires!

The House That Dripped Blood has one of the silliest, cheesiest, possibly cutest vampire stories out there.

There are many horror anthologies out there, in movies and television. In fact, it’s safe to say you’ll probably never see them all. However, if you want to see one of the silliest, cheesiest, possibly cutest vampire stories out there, check out “The Cloak” story from Peter Duffell’s The House That Dripped Blood. While ostensibly about a vicious killer curse, it’s really just a clunky yet lovable vampire story.

It’s weird because, honestly, its total lack of blood or scares or riotous humor calls out for ridicule. However, its overall cheesy and cute charm prevents me from being a hater. It’s probably also saved by offering a twist on the vampire genre. When I think of vampires, it’s usually about someone (or, I suppose, some italics] thing) who could be immortal if he drinks blood from a human. Still, the impression is that, to some degree, a vampire is ultimately a walking corpse. Here it’s more about a certain magical accessory you can wear to become a bloodsucker, and it almost seems curable simply by removing it.

Once it’s an anthology series, I might as well compare “The Cloak” to at least one other story from The House That Dripped Blood. “Method For Murder” features a character named Charles Hillyer (Denholm Elliott) and his wife, Alice (Joanna Dunham), who deal with apparent fantasies relating to the main villain in his novel called Dominic (Tom Adams). It’s a fairly decent story and freakier than “The Cloak,” but not quite as memorable. The main strength of this story is the idea of reality blending with fiction, or a character in Charles Hillyer’s new book who comes alive, attacks, and tries to kill the Hillyers.

“Sweets to the Sweet” is also decent overall, especially with the performance of Christopher Lee who is much too stern to his daughter, Jane (Chloe Franks). While I prefer “Method For Murder” over “Sweets,” it still has its merits, and it seems the original Creepshow‘s wraparound story has some thematic crossover.

And, speaking of wraparound stories, The House That Dripped Blood does have one of those, and it’s probably one of the better, simpler ideas to build an anthology horror film around. A very serious Inspector Holloway (John Bennett) is learning these twisted tales from the estate agent Stoker (John Bryans), who keeps renting out the house to tragic figures.

While this movie could be a little scarier (and bloodier!), it’s a 1970s horror flick you can put on to unwind. There isn’t much to wrap one’s head around here, which is sometimes perfectly fine. There won’t be many laughs, screams, or tears, but it does alternately convey a sense disarray and campiness.

Also, as I suggested earlier, “The Cloak” becomes tangled up in itself, but in a rather fun way. There’s almost no one on earth who would be frightened by the story, except for perhaps a very small child. Still, that’s exactly part of its charm, and why I recommend it as a fun little entry into the vampire story genre.

What are your thoughts on The House That Dripped Blood? Let us know in the comments!