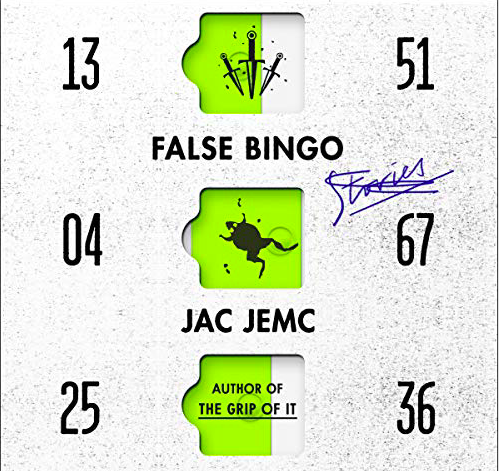 Jac Jemc’s writing immediately captivated me when I first read her story “Any Other.” This tale, about an unsettling transaction between people who are not what they seem, is one amongst many in her collection False Bingo.

“You’ve been waiting for the threat. That is where you are wrong.”

Jemc has a gift for creating large, complicated characters without saying too much. She reveals damning details of who they are through the little things: their slight gestures, abrasive habits, disturbing comments.

“I thought of Jean and his dirt-ceilinged fate. I thought of his daughters arranged around him like sunbeams in the burial plot. I thought of the taste of their tears as I licked them from the blade of my knife. Truth seeped through.”

The stories in False Bingo are built with suspense and investigations of the human condition in prose reminiscent of Shirley Jackson and Joyce Carol Oates.

“The Principal’s Ashes” involves a frog-eating boy and students on their best behavior under the threat of their dead’s principal’s watching eyes. A fictional retelling of “The Halifax Slasher” questions the phenomena of mass hysteria and when society decides to believe women. An anonymous figure in “Get Back” muses over the brutal deaths they may be responsible for.

These stories are sinister, sneaky and clever, infused with innate terror and an array of compelling voices. Jemc plays with literary techniques and plot devices that never dull, making each story a standout from the last. I’d read this as soon as possible if I were you.

Lookin for something to read but not sure what to choose? Check out what we’re reading here at Haunted MTL.