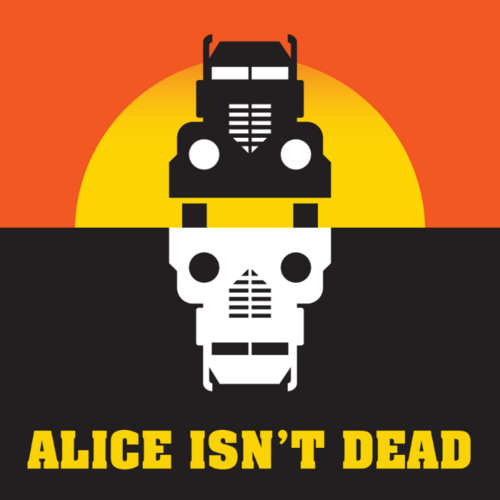 This isn’t a story. It’s a road trip.

Often I know if I’m going to enjoy a story within the first few moments. There have been exceptions. Some stories have taken time to grow on me.

Alice Isn’t Dead isn’t one of those stories. It’s the kind of story that starts out like a best friend whispering, “You want to hear something bad?” Of course you do. Who says no to that?

This podcast is like that. It’s not loud. It’s not grab you by the throat exciting. It starts out quiet. It starts with a woman watching a man eat an omelet at a truck stop.

On the surface, the story is about a woman trying to find her lost wife, Alice. She’s taken a job with a company called Bay and Creek shipping to enable her to drive all around America to search for her. But it becomes so much more than that.

There are strange things in this world. Little pockets of horror or confusion that most people never see. They never want to see. There are towns that are dying, that we can’t seem to stop driving through even when we’re sure we left them behind hours ago. There are men who age before our eyes, ever alone. There are children lost on the road, with no home and no hope other than vengeance. There are stories we’ll never hear, because there’s no one left alive to tell them.

Brought to us by one of the creators of Welcome to Night Vale, this podcast brings all the creepy mid American gothic sort of feelings you’ve come to expect from that. But it brings so much more. The writing in this story is rich, deep. It’s poetic and lyrical, beautiful. And that beauty makes the terror, because of course there is terror, so much worse.

I was really compelled by the talent of the voice actress, Jasika Nicole. She does the vast majority of the voices in season one, with the exception of one character. And she does a fantastic job. She jumps from accent and different inflections in a moment, seamlessly. And she conveys a difficult and realistic array of emotions like she’s really living this road trip.

I listened to this first season in the span of two days. Granted, the episodes are only about twenty minutes long. But if they’d been hours long each, I would have finished it just as fast. The story was gripping, wild, terrifying. And the ending was just what you’d want from a season one. Questions were answered, sure. But many more were left unanswered. And a couple new ones were added.

I’m loving Alice Isn’t Dead so far. And I can’t wait to dig into season two.