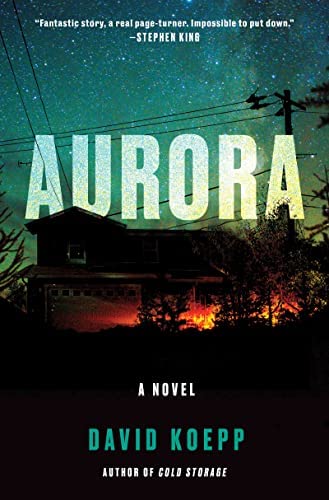 Who Can You Count On When The World Is Dark? David Koepp’s “Aurora” Asks

In his slow burn thriller Aurora, David Koepp shows us a world gone dark. Aubrey, in Aurora, Illinois, is trying to escape the clutches of her skeevy ex-husband while taking care of her teenage stepson that he left behind.

Aubrey’s multi-millionaire brother, Thom, has prepared for any disaster. He has built an underground bunker for any doomsday scenario there might be, complete with a set of employees to come along. He’s got a doctor, a chef, and a marksmen among others.

When a solar flare enters the Earth’s atmosphere and knocks out the world’s power, Aubrey must fend for herself and decide whether to accept Thom’s help as she navigates an electricity-free world.

Koepp’s Aurora creates an atmosphere of dread. What would happen to me if this really happened tomorrow? The fear in Aurora is created by the plausibility of the solar flare event.

The world goes dark, and the scary characters come crawling from the depths. Aubrey’s ex-husband, a gambling addict, won’t leave her alone. He tries exchanging time with a generator for cash that Aubrey and Scott don’t have.

Aubrey must navigate this new world with her stepson and try to keep the two of them safe. Her brother is across the country in a bunker. Will she accept his help? He owes her for something that happened in the past. You must read on to find out exactly why Aubrey and Thom have such a tumultuous relationship.

This novel is not a typical thriller, as it is a very slow burn, but this novel delivers dread and uneasiness. I enjoyed watching Aubrey and Scott’s relationship as stepmother and stepson grow in the face of adversity. Aubrey is such a strong female main character and Koepp did such a great job writing her.

I spent a lot of time digesting this novel and it has really lived with me past the final page.

They Were Here Before Us Book Review