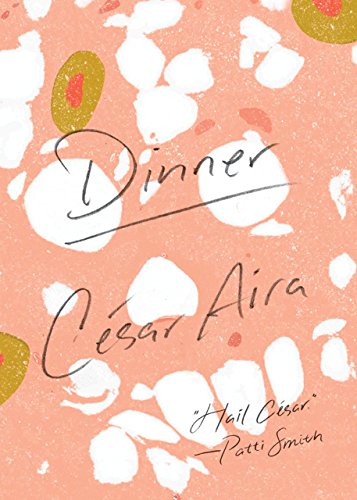 Part horror story, part fable, this novella follows the story of Pringles, Argentina. A middle-aged bachelor and his mother visit his wealthy friend and sees all of his trinkets and strange collectables. The wealthy friend and the bachelor’s mother find connection in discussing the old families of the city. Not long after the bachelor and his mother return home from the dinner party, the dead begin to rise from the local cemetery. What ensues is an attack on the living of the town. The dead begin attacking and murdering, slurping the endorphins from the living for themselves. In the end, the dead can only be sent back to their graves when the town residents recognize the corpses as members of the old families, calling their names and sending them back to the cemetery.

The concept of the dead eating endorphins, seeking them out as vehemently as the living do each day, is compelling. As the corpses feast on a wealthy group of party attendees, the text reads “It was one of the best banquets of the night, that defenseless conglomeration of rich French partygoers – a class of people who make the production of endorphins their life’s work” (67). This fable has a strong lesson or two. Our search for happiness is consuming, just as the zombies find themselves tearing through town and sparing no one to steal these endorphins. Modernity creates a drive for endorphins that spare no one. Cutthroat tactics are employed to get what we desire, what we think will make us fulfilled.

This line was particularly striking: “And these active endorphins, the ones the nocturnal slurpers most valued, were the specialty of the majority of the rest of the population: the old, the poor, the humble, the sick. The last scraps of human detritus, people who hadn’t enjoyed a single moment in their entire life, had to produce tons of endorphins in order to keep that life going” (70). Those less fortunate must produce endorphins in an extreme just to survive, while the wealthy and well-off spend money and kneecap others to gain happiness while taking happiness away from others. Human nature and selfishness is displayed deeply in this text.

The ending, where the corpses return to their graves upon having their names spoken into existence, is a call to the past and how our fixation on the past takes our happiness. Once the past is recognized and sliced through with words, it can rest, and the living can move forward. The connection back to the beginning with the mother and wealthy friend connecting over the families of the town is spectacular. The story ends circularly and calls into being the past and how it affects our everyday happiness and ability to move forward.

This little novella is terrifying and gory as the reader watches the dead release fearlessly upon a small town. What can stop them? That is where horror meets fable. Seriously fantastic prose and dreamlike story.

It Came From the Multiplex: Horror and Nostalgia