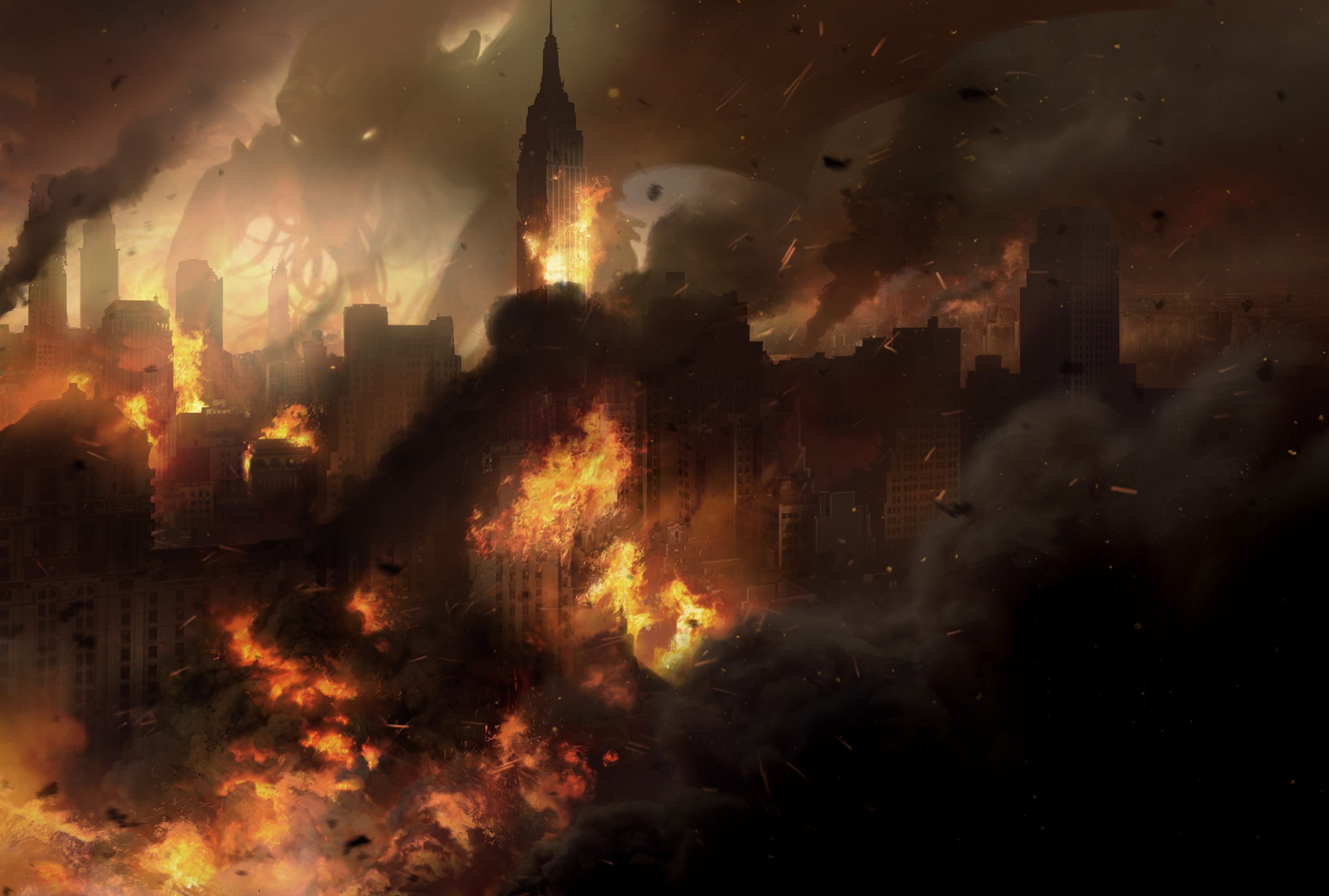 I ran into Free League Publishing at GenCon 2019 by mistake. I was looking for another booth and I found this Aliens looking creation. Turns out, I found the booth for their Aliens RPG game! The art sucked me in and so did their gaming concept–once I get over my facehugger phobia, I might even play it!

This isn’t an Alien game, oh no, this is a massive graphic novel adaptation of an HP Lovecraft keystone story. The Call of Cthulhu runs deep here at HauntedMTL (you might have noticed our star system, eh?), so when Free League Publishing offered up a review copy, I said hell yeah!

A book as big as Cthulhu

First–this book is massive. I mean, the poor girl at the post office was trying to figure out what it was when she handed it to me. It’s maybe a bit ‘too big’, really. There aren’t too many bookshelves that are set to ‘stun’ for the height of this beastie.

Size ain’t everything, so let’s get to Kraken (see what I did there?). The story is one we all (should) know by now. I won’t critique Lovecraft other than he’s probably why many of us are here in horror one way or another. The art by Francois Baranger is the reason this version of the story exists. Does Baranger pull off the impossible and add to Lovecraft or does his work, like so many others, fall at the wayside of ‘opportunity lost’?

Well, if you saw the Cthulhu rating in the title, then SPOILER–you know what I’m about to say. Baranger’s work is amazeballs. There are some things that don’t sit right with the faces for me, but that’s a stylistic choice. The work with the monsters and action scenes are damn near perfect. I’ve sprinkled a few in this review with my favorite being the featured image here.

What works well for Baranger is the color, the motion, the show and hiding just enough that we can experience the dread of the story come to our visual cortex. I love the monster work here–simply love it. I know any graphic or visual adaptation of the written word takes a mighty big risk as an imagination is more powerful than most artistic ability and once an artist places a drawing down–it becomes the ‘thing’ weighed against your nightmare. I have to say, Baranger might not have gotten everything ‘exactly’ how I saw it in my head, but it’s damn close.

If you are a fan of graphic novels, Lovecraft, Cthulhu, or just really huge books in general, then this is the book for you. It won’t make a good stocking stuffer (unless maybe you’re shopping for Shaq) but this would look great all wrapped up for your favorite Lovecraft nut in your family. Go ahead and click on the link here to shove it in your amazon cart–you can thank me later.

H.P. Lovecraft is a giant of horror literature and popular culture. Since the 1920s his short stories and novels has spellbound generations and influenced countless games, comics, novels, records and films. His short story The Call of Cthulhu, written in 1926 and first published in Weird Tales in 1928, is an absolute classic. Now, french artist François Baranger presents the ultimate illustrated version of the story. Baranger’s The Call of Cthulhu is a 64-page hardback book in the huge 262X350mm folio format, bringing Lovecraft’s horror to life with lavish, full-spread images.

Review: Hellboy and the B.P.R.D. – “Long Night at Goloski Station”

Stoker and Wells: Order of the Golden Dawn – a Good fun but not perfect romp (3.5 Cthulhu)