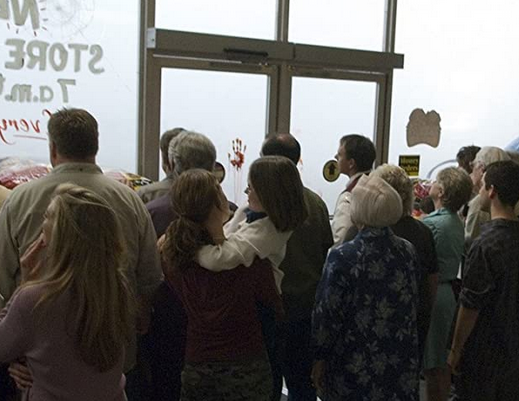 Book Vs. Movie, The Mist

Spoiler alert! We’ll be talking about the ending of both the novella and movie The Mist today. You’ve been warned.

Movies and tv shows not based on books are few and far between. Some, like Witcher and Forrest Gump, benefit from the treatment. Some, like Series of Unfortunate Events, needed a couple of tries.

Then there are the stories that were beautiful on the page, and the worst garbage ever inflicted upon mankind when put on the big screen. Unfortunately today we’re talking about a movie in the last category. Stephen King’s The Mist.

Originally appearing in King’s 1985 short collection, Skeleton Crew, The Mist novella is a beloved story that looks at terrors from the outside world and those we make ourselves. It’s about a group of survivors trapped in a grocery store while strange monsters hunt outside. The thick mist shields the creatures from view, leaving the real horror to fester in the survivors, and the readers, imaginations.

The main character, David, is trapped inside the market with his young son. When people start turning to their worse nature, eyes of suspicion fall upon them.

Atmosphere was a big thing in this novella. Reading this, I felt like I was also trapped in a grocery store. Which, let’s be real, would be kind of fun. There are worse places to be trapped long term. There’s plenty of food and water, facilities. Even toys and books to keep people occupied. And condoms. You know, because this is a King book and there has to be some necessary sex.

But you could also feel the tension mounting. In the end, what was waiting outside wasn’t nearly as horrifying as what the survivors were becoming.

The ending of the story was especially good. A group manages to get to a car and drive to a hotel. There, they find a radio. Changing through the stations, they hear one word among the static. They’re not sure if the word is help or hope.

Now, let’s talk about the movie. God help us.

I will say that the casting is good. Marcia Gay Harden was terrific as the horrifying Mrs. Carmody. Thomas Jane was good as David, really putting his all into a rather dull character.

That was my biggest problem. The movie was boring. I get that there isn’t a lot going on in the novella, but there’s next to nothing happening in the movie.

Gone is the jovial, fun feeling of the community cookout. Gone as well is the simmering worry of the survivors who crowd around Mrs. Carmody. You just can’t feel the ever-increasing tension between the two groups of survivors, or the increasing worry that some might not survive to be eaten by the creatures outside.

A dull movie would have been bad enough. I was almost snoring by the time David leaves the grocery store with his son.

Then, the movie decided to sucker punch us.

Rather than have the group reach a semblance of safety, their car instead runs out of Gas. David shoots every member of his group save himself. Then he steps out into the mist, calling on the monsters to finish the job.

Instead, the damned marines come crashing through, just seconds after. David, having just mercy killed his son, girlfriend, and aging friend is left with that weight on his shoulders.

This ending is the equivalent of a mean kid burning ants with a magnifying glass. It’s the most emotionally devastating thing most of us can imagine. And that’s just not how you end something.

Look, I’m no wuss when it comes to sad endings. But there’s sad, and then there’s an all-out crotch kick with steel boots. The ending of The Mist was the second.

If you want to check the book out, feel free to click on below via Amazon. Remember, if you buy, we do get $.

Related Topics:The Mist
Up Next