The third season of Netflix’s The Chilling Adventures of Sabrina did one thing above all others. It assured fans that it will indeed stay the course that the show has been on since season one.

Watching the first two seasons of Sabrina has been morally problematic. I have enough friends and loved ones who are of the Pagan, Wiccan or Witchy persuasion to be at least second hand offended over a lot of it. As someone who’s at least witchy curious, mixing up witchcraft with biblical Satanism is something I find dickish. I don’t love the bastardization of familiars, the way all the witches go around praising Satan, or the depiction of Lilith as a vengeful demon out only for herself.

But these arguments aside, there’s a lot to love about the show from a witchy perspective. Aunt Hilda is the picture of a kitchen witch. She’s sweet and supportive and makes a hell of a good cake. But there is a spine of steel in that woman, and woe betides the person who messes with her family.

Now, the last season ended with Lilith taking the throne of Hell, giving Sabrina her witch powers and her freedom. The two of them together toppled over Lucifer and the vile Father Blackwood, a true Yass Queen moment. So maybe they’re going to quit it with the whole satanic edge?

But let’s get into the meat of this first episode. Because even though it’s a little cringy sometimes, I still kind of love this show somehow? Let’s discuss this.

At the end of season two, Prudence and Ambrose set out to find Father Blackwood, kill 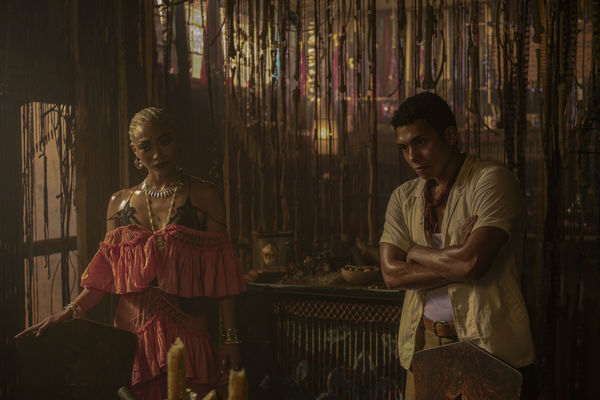 him, and save the twin babies. They’re in New Orleans, hunting him. Of course, everything they know about magic they learned at his knee. So he’s one to twenty-seven steps ahead of them.

So they’ve got the only two black witches in New Orleans, needing a way to fight their white father figure.

Of course, they start diving into Voodoo and Hoodoo. Fingers crossed they handle this with the respect and weight it deserves.

Or they’ll have both Prudence and Ambrose flittering around dripping in sweat, wearing sexy time clothes and having sexy times. That’s, um, cool too?

Okay, but let’s get into the part of the episode that I find cool. Lucifer is trapped, Father Blackwood’s daughter has announced hunting season on his ass. So the power structure of the whole church of night has been cut off at the head. (Pun intended.) Aunt Hilda and Zelda take over, but they’re facing myriad problems. The largest one is quite a heavy problem, and I’m here for it.

What happens to your religion when you just trapped your God and helps another one take his place?

I mean, wow right? And they’re struggling with that. They’re having a huge crisis of faith in a real in your face grappling way. And they’re trying to help guide a group of kids through this as well. All the while, trying to deal with the thought that maybe their niece, who they raised as their daughter, is also a demigoddess.

This part of the story is just getting going, and I cannot wait to see how they handle that.

But we’ve come this far, and we haven’t even talked about the main character, plucky little Sabrina.

Who likes to hang out with her friends and sip milkshakes. And also lead them into Hell to save her boyfriend. Who has her father, the devil, trapped inside his body?

Yeah, so apparently that’s the storyline we’re dealing with this season. Sabrina leads Harvey, Theo, and Ros into Hell to bring Nick back. There, they find that Lilith has for no real good reason taken out Nick’s tongue, brought Theo’s uncle’s soul down to be unfairly tortured, created a demonic tinman that looks like Harvey’s brother and designed a horrific slaughter school to torture her former allies.

So, lot’s of questions here. One, why does Lilith want to torture Nick? She promised Sabrina she would keep him safe. They left on really good terms. Everyone had what they wanted, everyone was happy. So, why is Lilith torturing them?

Another question. If keeping Nick on Earth was an option, why did they send him to Hell to start with? Why has this whole thing happened at all?

Honestly, it seemed like just an excuse to get Sabrina to Hell. There, she’s told that the three Kings of Hell won’t accept Lilith as queen. But they might accept Sabrina since she’s Lucifer’s daughter.

All of this is setting up for a season that promises to be balls to the wall crazy. I’ll be breaking down every episode here. I hope you’ll join me on this rollercoaster.

The Stand Miniseries: Part 2: The Dreams

If you ever wondered what a traditional syphilis test felt like look no further than to episode 7 of… https://t.co/NgvrDlpkII
9 hours ago

True Blood Season 7, Episode 6: “Karma” We open this episode with a weary Eric fighting off the Yakuza. He is forc… https://t.co/3V9w40B2Hm
9 hours ago