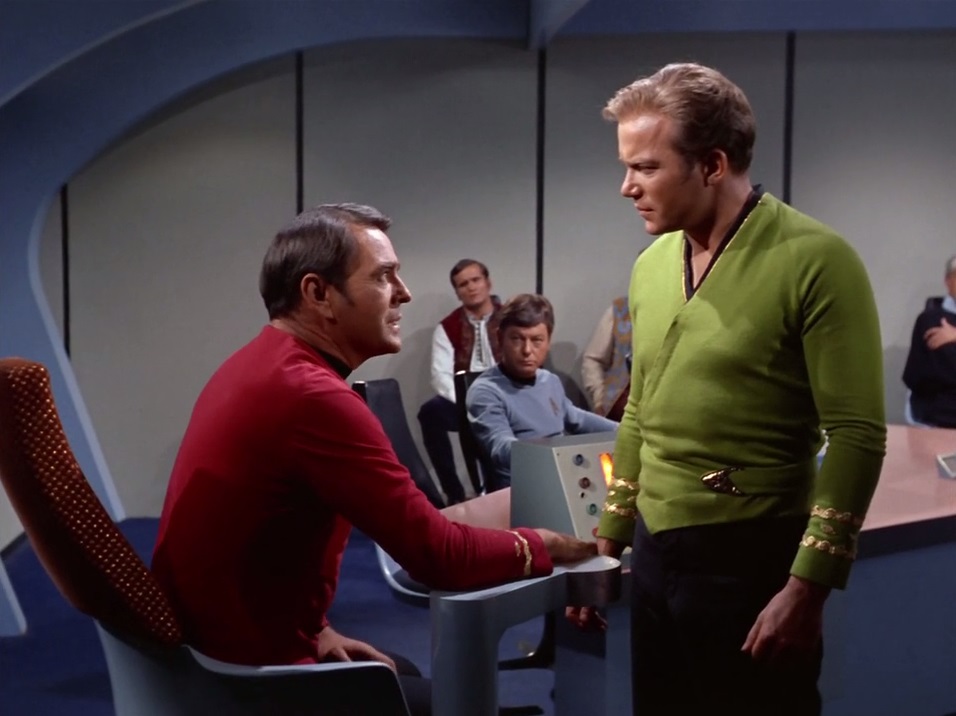 I will confess that, while I enjoy the various flavors of Star Trek (Picard’s wit, Seven of Nine, Kirk’s goofiness, and also Seven of Nine), I am not a Trekkie. I am not hard-core. I watch with the same amusement that I watch Baywatch or Ghost Adventures, while sometimes enjoying the casual surprise of a good concept or story (I’m talking about Trek, of course, of course).

And while Star Trek is Sci-Fi, exploring the philosophies of what makes man “man”, there have been occasions that the show has dipped its green, sexy toes into horror, or the concept of horror, as is the case with this Deadly Deviation, “Wolf in the Fold”, a.k.a., “Yes, that one”.

Scotty, having a prior head injury and a “total resentment of women” needs to loosen up, so tha boyz (Kirk and Bones) take him to pleasure planet, Argelius II. As Bones puts it, it’s a total hedonistic society, but in reality, it’s just a lot of belly dancing and sitting on pillows, fully-clothed and not idly scrolling through cat videos. So, not really my idea of hedonism. Anyway, they are DTF, big time. There’s a long, full minute of tha boyz just full-on leering with close-ups, so ladies, you have a little something to enjoy (I think that’s what women are into):

Taking a break from belly dancing, the woman and Scotty take a foggy stroll outside the club. Bones and Kirk are about to hit what may be a brothel (?), but a scream pierces the quiet night.

Racing there, they find the dancing girl has been murdered and Scotty holding the knife!

It gets boringly goofy with psychic readings, close-up reaction shots while someone else is talking, more Mr. Scott killing women and forgetting about it, Piglet trying to maintain order and rationality with a bunch of hippies and, well, the twist. And whew, what a twist! Like, on Shyamalanian proportions. For those who’ve seen it, you know, and I knew it going into watching it, but I still laughed pretty hard at the reveal.

Anyway, there’s a killer about and it’s more a philosophical and sci-fi take on a human (or not-so-human) boogeyman, which unfortunately falls a bit flat in retrospect. The idea is interesting and was certainly refreshing for the time, for sure, but the execution was, well…

It’s less of a whodunit and more of an exploration of a classic boogeyman and retrospective of fear (especially women because they’re more likely to be wimps, amirite, Spock? up-high, bro), this episode is a bit long and ends with everyone on the Enterprise high AF and Kirk deciding that it’s for the best if he just stays in for the night and masturbates.

There’s been a lot of criticism for this episode already…so let me add to that bucket!

For this episode mentioning the resentment of women and how that’s evil, the only thing women do in this is belly dance, give psychic readings, get killed, and take notes for tha boyz. We don’t even see Uhura, not even to get high. Seven of Nine wouldn’t put up with that crap.

Piglet has beautiful blue eyes. Oh, and watch it for fun, but while doing something else.

Witcher, Episode Eight. So Much More