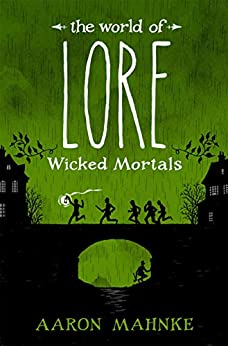 Lore, Wicked Mortals. For when you want to be scared but also learn

Scary stories are best when they’re real. A tale about the monsters who hide in human form will always send a chill up my spine.

If you’re like me, then you’ll find Wicked Mortals by Aaron Manke to be a treat.

The book is a collection of true stories from History of truly horrible people. Many of these stories I already knew, like the one about HH Holmes. But some, like the tale of John Murray Spear, were completely new to me. One of the best new ones in this collection was the tale called Lost and Found, about a thief and killer named Kate Webster. It was, in a word, eerie. It’s the kind of story that makes you want to run a background check on the assisted living person helping out your grandparents.

Aaron Manke has a distinctive voice, if you’ve ever listened to his wildly popular podcast, Lore, you know this. He has a way of speaking that is so kind, so gentle. He sounds like the sort of man any mother would want to date her daughter. And all of this, while he’s telling tales of cannibalism, mass murder and cryptids.

Wicked Mortals has that same voice. When I was reading it, I felt like I could hear Manke talking right to me.

I was astounded by how well researched the stories in Wicked Mortals were. Several times I read something that made me say, out loud at one point, “No, that’s not true. I’m checking Snopes.” And I’ll be damned if Manke wasn’t spot on.

There’s a fascinating bit of information in here about David Attenborough, the famed English Naturalist. I won’t ruin it for you, but it’s fun.

Scary stories have a bad habit of embellishment. A storyteller puts in a bit of spin, a little extra blood, a bit of style. Then another storyteller picks up the new version and does the same thing. And so it goes, a decade’s long game of telephone. This leaves us with a cobbled-together tale that’s more myth than fact.

There’s little of this sort of thing in Wicked Mortals. The stories are there, without the fiction coating. And they’re still just as wickedly scary.

If you’re looking for a book that will freak you out and teach you something new, Wicked Mortals is one to add to your list.