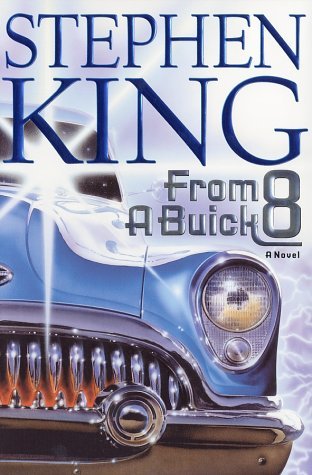 From a Buick 8 is possibly the most beautiful, impactful novel that Stephen King has ever written. It’s the one that’s stayed with me the longest and the one I’m most likely to come back to.

I might be biased, though. From a Buick 8 is set close to my hometown, Butler PA. While reading it, one can tell. At least, it’s glaringly obvious to someone who grew up in this rural steel town. But even for those who aren’t familiar with the area, From a Buick 8 is still a rich, riveting horror story.

The book is told through a series of flashbacks. It’s set soon after a state trooper named Curtis died in the line of duty. His troop begins telling his teenage son, Ned, stories about Curtis. Stories that are also about an old Buick Roadmaster parked in a garage on the barracks property.

The Buick is the real mystery of the story. It was left behind at a gas station years ago. The owner vanished, never to be seen again. This is a mystery by itself. But the things that start coming out of the Buick are the real horrors.

As the troop shares their stories of Curtis and the Buick, we see how this loss impacted his troop. Curtis left three kids and a wife behind. But you get the sense that the people who miss him are members of his troop.

There is a hole in their lives that hasn’t healed. This hole leads them to pull Ned into their family. As they induct him into the troop, they don’t see the trap they’re part of setting for him. They don’t see the Buick wrap itself around Ned’s mind and draw him in until it’s too late to stop.

Don’t let me mislead you. There are monsters in this book. Horrifying creatures from another universe. Things that are not entirely explained. Animals that die and start to rot as soon as they try to breathe our air. Leaves that burn the flesh. Arms that threaten to reach out and pull us into the world that has been so quick to give us these tiny terrors.

These elements are blended with the story of a young man reconciling with the death of his father. While it doesn’t seem like those things should go together, they do.

If you’ve never read From a Buick 8, you should. In the end, the monster is the thing we’re all most afraid of. The unknown.

Related Topics:Stephen King
Up Next