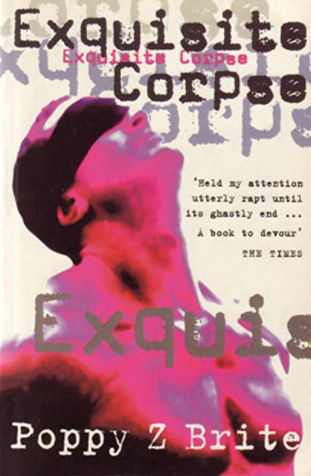 If you’ve ever played a game of exquisite corpse where one artist or writer starts a picture or story and another adds to it to inevitably end up with something that’s both terrifying and surreal, odds are you’ve still probably never wondered what would happen if that artistic method was applied to serial killers.  Well, you’re about to find out.

Don’t say I didn’t warn you.

Exquisite Corpse is a no bars tour de force of the physiological depravities, gore, immorality, debauchery, and fatalism of two horrifying serial killers in the early 1990s gay scenes of London and New Orleans.  Not only a horrifying portrait of heinous evil, but also a lushly crafted imagining of the serial killer’s victim.  Deemed too extreme for publication at first, it got tossed around to different publishing houses before finally getting a release in the UK and the US in 1996.

The book switches between four uniquely intimate points of view.

“My name is Andrew Compton.  Between 1977 and 1988 I killed twenty-three boys and young men in London.  I was seventeen years old when I began, twenty-eight when they caught me.  All the time I was in prison, I knew if they ever let me out I would continue killing boys.”

Andrew Compton should be a name as infamous as Hannibal Lector, only necrophilia isn’t quite as sexy as cannibalism (but more on that later).  Compton has already been languishing in jail for 5 years for his crimes when we first meet him.  But, rest assured, he’s not there for long. In what may be one of the most tense first chapters of any horror novel ever written, his break out and subsequent flight to America leaves a ghastly trail of blood-soaked victims in its wake.  With nothing to lose, and a vow to die before he’d ever go back to prison, he quickly becomes one of the most dangerous men in the world.  Compton is disturbingly smart and extremely self-aware, making his tightly controlled manner and homicidal personality that much more frightening to read about.  He’s also always on the lookout for his next victim. In New Orleans he’s about to find that, so much more.

“How could he die in the middle of his great adventure?”

A young Vietnamese-American man living in two worlds entirely different worlds in early 1990s New Orleans.  In one world Tran is the proper son of his traditional Vietnamese parents; helping at his parents’ café, spending time studying computer programming, and writing in his notebooks.  In the other world, his world, he’s a drug dealer in the seedier parts of the French Quarter; going to raves and picking up men in the gay clubs.  He’s living life on the edge without wanting to know whether or not he’s living or dying.  He’s also got exceedingly bad taste in men, which makes him a perfect target for a particular type of bad man.

“He figured Lush Rimbaud was insane, probably had been for some time.  But he was starting to wonder about Luke Ransom, too.”

30 year old writer, ex-lover of Tran, AIDS patient, and nightly shock jock Lush Rimbaud on pirate radio station WHIV broadcasting from the bayou spreading the truth of the Gay Plague; Luke couldn’t be more pissed at the world if he tried, and he does try.  Everything he does comes with the caveat of not having enough time left.  Not enough time to write his book.  Not enough time to get Tran to forgive him.  Or to forgive himself for trying to kill him.  There’s some things though he’s not willing to let go of yet, and that includes Tran.

“His guests turned into friends after they were dead, but those friends were fathomable: they would always belong to him, because they could never leave.”

The playboy old money creep of the French Quarter. Jay enjoys his hobbies (exotically photographing boys, butchery and math) a little too much.  Even though his money and being as careful as possible allows him to indulge his vices to his heart’s content, he knows something is missing.  If only there was someone out there who could understand his proclivities the way he does. . . .

When a necrophiliac and a cannibal love each other very much  . . . no babies, but lots and lots of bodies.

This book will absolutely be too much for some people.  It’s and unforgiving at it is unforgettable. Not the kind of thing you can recommend to other people because that would be admitting you’ve read it yourself.  It’s so hard to stomach in part because of the extreme content and brutality, but also because it’s so engrossing with its ability to unnerve you with wholly unsympathetic characters that are terribly flawed, yet understandable.  You come to see how every character is fighting for survival in their own way.  There’s an overriding theme of loneliness throughout the book that looms over all the actions people attempt in order to elevate it.  Perhaps the most interesting part of the book is when Andrew and Jay finally meet and sense, for the first time in their lives, the mortifying ordeal of being known.  Then there’s the other silent killer in the book, AIDS, which takes a fair share of victims.  It may sound like a clique in 2020 to have a book about gay men dealing with serial killers and AIDS, but it lends a true sense of realism to the book in this case.  Imagine a book set in 2020 that didn’t mention COVID.  Exactly. This book truly is a snapshot in time.; a time where gay killers stalked gay men on the streets of New Orleans and London along side the looming threat of the AIDS virus.

Read If It Bleeds for more than just the title story