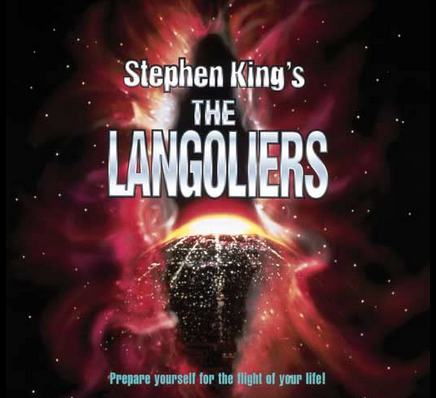 The Langoliers, an underrated horror film?

Among the many movies based on Stephen King books, The Langoliers has a reputation for being kind of silly.

This is entirely unfair. I mean, it wasn’t a scary movie, exactly. Not in a bloody, gory, jump scare sort of way. It was scary in more of real life, time not on our side allegory sort of way.

Based on a novella, this three-hour-long movie came out as a miniseries in 1995. Proving that even Stephen King isn’t long enough for some people.

If you haven’t heard the story before, here are the basics. A group of people on a plane somehow get phased out of time and, for lack of a better term, left behind.

The cast is exactly what you’d expect in a Stephen King cast. I swear you could pop these people out and put them right into any other story. The strong men in charge, Captain Brian Engle and Nick Hopewell. The mentally handicapped, I mean crippled, I mean a blind child with magic powers, Dinah. The clever old man, who also happens to be the writer, Bob Jenkins. And, of course, the lovely strong woman who nevertheless takes a backseat and lets the men handle things, Laurel Stevenson.

These characters aren’t cookie-cutter, but they are exactly the same people King always writes. They’re the cast of The Stand all over again. The only real unique character is the antagonist, Mr. Toomey.

He was fun. A high-strung type A who always feels like he’s behind. Even better, he’s always behind because of everybody else holding him back. As a child, his twisted father told him about creatures called The Langoliers who ate up lazy children.

Now, the fact that most of the characters are typecast doesn’t matter. Because they’re just there to move through this weird world outside of time. A world where everything feels stale. The food is tasteless. Matches don’t light. The air feels like you’re standing in a room no living being has been in in years.

All that aside, the characters have free reign of the airport. And that’s always a fun premise. I think everyone has fantasies of being alone in a big public place like an airport, a mall or a library. The atmosphere is both fascinating and skin crawling.

The movie would have been a straight SciFi, if not for Mr. Toomey. He is, without a doubt, one of the creepiest King antagonists ever. He is behind time, late in the worst sense. And he’s developing all kinds of weird ticks. Like slowly ripping paper into thin strips. Or brutally murdering his fellow passengers.

There’s this great analogy in this movie, about a whale who lives its whole life at the bottom of the sea. It’s lived all its life with the pressure of all of that water on it. So much so that if this whale should ever be brought to the surface, its body wouldn’t survive. But in the moments before death, what a relief it must be to have all that pressure gone. That’s one of the moments that sticks out the most when I think of this movie.

The other thing that sticks out is the reprehensible cocoa puffs with teeth that are the langoliers. If this movie suffered from anything, it is poor special effects. These langoliers were bad, they were just bad. There have been two horror movies that have made me laugh out loud when I saw the monsters. This is one of them.

Not enough could ever be said about how laughable these creatures were. I don’t know how they could have been done better. But I know that if Night of the Living Dead could scare the hell out of me on the budget it had, someone could have done a lot better with this.

All that being said, The Langoliers is a decent movie. If you saw it when you were younger and it didn’t grab you, try it again. I honestly think it’s a horror movie for grownups only. And if you’ve never seen it, there’s no better time than now.

Related Topics:LangoliersStephen King
Up Next