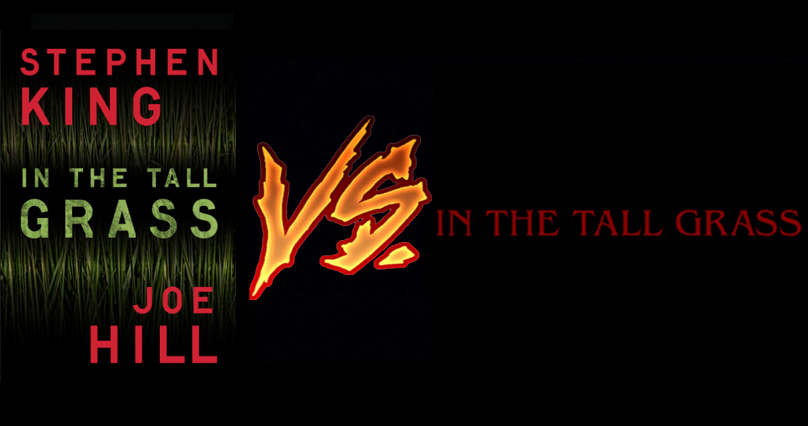 There is so much about Stephen King’s and Joe Hill’s In the Tall Grass that I want to know that isn’t answered by either the movie or the book.  Normally I might consider that a bad thing, but in this case it lends an air of mystery and suspense to the age old question, “What does a field of grass really want?”  In the Tall Grass is a dark tale with a mind-bending slant on other worldly experiences.  The amount of scares you get out of the story might depend on your own personal experiences with grasses, but that doesn’t mean it’s not an interesting thing to watch happen to other people, even if you’ve never been frightened of fescue before.

Cal and his nineteen year old sister Becky are on their way cross county to drop off Becky’s still in the oven baby with a new family that wants to adopt it in San Diego.  Somewhere just south of Nebraska’s Children of the Corn in Kansas, they get side tracked when they stop and hear a boy calling for help from some tall grass at the side of the road.  They apparently didn’t have the common Midwestern knowledge of, you never stop in Kansas.  In an effort to help, they enter the grass to try to find the kid and get lost themselves; literally, physically and metaphysically.  Needless to say, mistakes were made.

I actually read the book after I first saw the movie hoping it would expand on the story told in the movie, only to find the exact opposite.  The book is only really concerned with the characters of Cal and Becky, telling the tale of what happens to them in the grass.  The few other characters in the book have clearly nefarious motivations right from the start, and aren’t really given any characterization beyond that.  It’s a sordid little story and, while there’s nothing wrong with it, it also doesn’t stand out, especially compared to the movie.

In the Tall Grass – The Movie (or the expanded book edition).

The movie version of In the Tall Grass came out on Netflix in 2019 without much fanfare and was quickly buried by the algorithm after about a month.  It’s a pity because it may be one of the truly great Netflix original horror movies on the streaming service.  Directed by horror veteran Vincenzo Natali, with a screenplay by King and Natali, the movie builds on the framework of the book to make it what you might call a truly original work of the horror genre.

The story starts approximately the same as the book, Cal and Becky are driving through Kansas when they stop at an abandoned church after hearing a cry for help that draws them into the tall grass.  What makes a difference here is being able to really see and hear just how disorienting being lost in the grass is; voices carry in odd ways, the sun seems to change position in the sky, other people will be close one moment then far away the next.

The movie also brings in the new element of the grass distorting time, as well distance and sound. It adds a whole new layer to the story and is actually one of the most interesting aspects of the movie.  I won’t give too much away, the journey is really the best part of watching the movie, but because of this time distortion it allows the movie to introduce new characters and locations that weren’t in the book at all.  Characters like Becky’s boyfriend Travis, played by Harrison Gilbertson (whom I’ll definitely be looking forward to seeing more of in the future).  When Travis enters the movie he almost becomes the main character, and as events unfold he helps lend more backstory and depth to the other characters.

Visually the movie is stunning to look at.  Natali manages to make a field of grass truly seem like a living breathing organism.  Inventive camera angles and wide shots of people moving though the grass, or even just the grass moving on its own in the wind, lend to the eerie and ominous atmosphere of the film.  And credit where credit is due to the film’s concept art designer, manga artist Shintaro Kago for making grass seem threating in a variety of ways. Extreme closeups are used often to great effect to give a visceral feeling to feet squelching in hot mud, the fall of dirt on a dead bird’s body, sweat dripping down a face, or the relief of cool rain drops on a blade of grass.

There’s so much they did right in this movie you can certainly forgive the one or two overuses of CGI here and there, and the fact it was filmed in Canada instead of Kansas.  I don’t even think I’ve mentioned the acting yet, which is spot on by everyone in the cast.  If you can’t tell, I thought this movie was one of the best of 2019, and I LOVED US and The Lighthouse (2019 pretty much rocked the horror movies in general).

In the Tall Grass the book may be a bit lacking, but the movie blew away all my expectations for what a Netflix original horror movie could be.  Under Natali’s expert direction it may be one of Stepehen King’s scariest horror movies in a long time.  Clearly I think it’s worth watching and rewatching around the time the grass starts getting greener outside.  I would watch any number of prequels and sequels about this dimensional patch of grass in Kansas with a black rock in the middle of it because it clearly has more stories to tell.  How did the grass fare during The Dust Bowl?  Were Cal and Becky really chosen or was it just dumb bad luck they stopped?  And how does the grass affect your game if you’re bowling at the bowling alley across the street from the Church of the Black Rock of the Redeemer?  These are all important questions that still need answers.

Lolita Lookalike: “Putney”and its ability to create fear of the predatorial mastermind