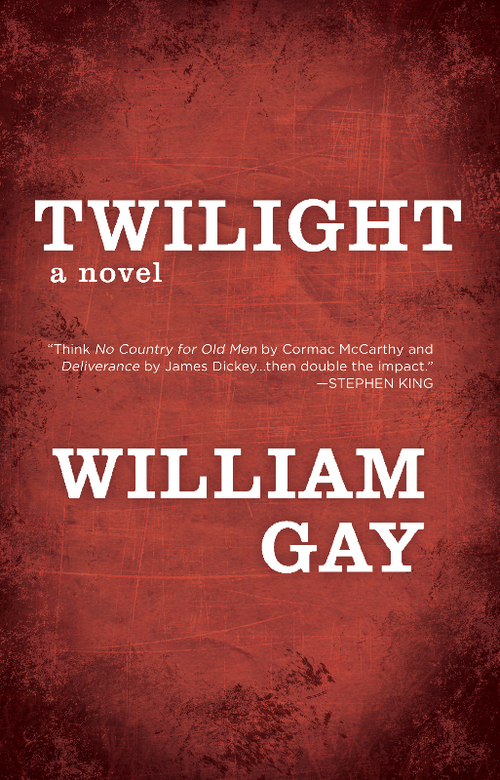 For fans of Cormac McCarthy, Ron Rash, Donald Ray Pollock, and Stephen Graham Jones is William Gay. An Appalachian gothic writer, Gay’s prose shines in its terrifying nature. In Twilight, a brother and sister hope to bring a small Tennessee town’s corrupt mortician to justice. The pair dig up graves, discovering that bodies are not embalmed, not clothed, and even mutilated. Tyler, the brother, even steals a briefcase from the mortician’s car trunk that houses incriminating photographs.

What follows is a cat and mouse game: an escape from a hired murderer, a dash for his life, and run-ins with witches and old men along the way. The structure of the novel is similar to McCarthy’s The Road. As Tyler tries to escape the man hired to kill him, he travels through the wilderness, running into characters along the way: a woman he tries to steal from who forces him to do a chore, an old man rocking on his farm porch, a witch who promises to be able to deliver a hex. It reminded me of the man and the boy’s journey to survive, running into groups of good, and especially evil, people. The reader lives the journey with Tyler as he runs for his life and doesn’t mind the winding open-ended adventure throughout the second half of the novel.

Not only does the novel feel inspired by The Road, but there are also tinges of inspiration seen from McCarthy’s novel Child of God, a novel about Lester Ballad, a twisted man who desecrates corpses, similar to the undertaker of Twilight. It is easy to see similarities and inspiration in the fact that Gay also forgoes traditional punctuation, not using quotation marks for dialogue. I see heavy influence between the two Southern Gothic writers.

Charles D’Ambrosio says of Twilight in Paste Magazine, the novel “will likely divide readers into two camps – those who love the Southern Gothic element and those who don’t.” The Southern Gothic element and the story being set in the past in a historical context may seem unlikely to lend itself to horror, but the way it functions with the darkness of the story comes together. D’Ambrosio continues to say that “The story is death-drenched, the characters hardly seem to belong to the last century, the language is torqued with rhetorical flourishes, and the plot is packed full of cruel and gruesome events that feel as if an entire culture were emptying the repressed contents of its gloomy psyche into the world.” This melding of literary techniques and horrific content will be sure to please any fan of Southern Gothic authors or horror writers situating themselves in a region-specific legacy.

Donald Ray Pollock’s “The Devil All the Time”