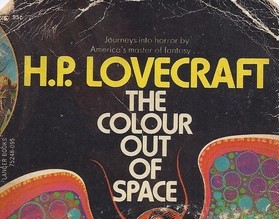 Lovecraft’s “The Colour Out of Space”: Review before Debut

A look back at The Colour Out of Space…

Adaptations include Daniel Haller’s 1965 Die, Monster, Die!, David Keith’s 1987 The Curse, and Richard Stanley’s 2020 Color Out of Space. It has influenced movies like 2018 Annihilation and books like Stephen King’s The Tommyknockers and short story “Weeds”.

The narrator is an unnamed Boston surveyor relaying his encounter in the hill county West of the fictional town of Arkham. He records the account from a local name Ammi Pierce who tells him of the “strange days”, a period in the not to distant past. Ammi relays the story of Nahum Gardener and his family.

When a meteorite lands on the Gardener land, the news reaches as far Miskatonic University. As professors begin trying to make sense of the unearthly visitor, the meteorite disappears and the effects it has on the land becomes apparent. The crops on the Gardener property begin to grow large and vibrant but are sour and inedible. Soon, the decay begins to affect the live stock and even the family.

As the family succumbs to various illnesses, mental and physical, one of the children goes missing. Nahum claims that something is in the well and it took the child. When the police arrive to investigate, the last of the meteorite’s effects leaves none questioning the presence on the Gardner farm.

The narrator concludes by relaying his fear of the place now known as the “blasted heath”. The reservoir that will cover the old homestead will be in use shortly and the narrator hopes to avoid it. He will write the workers as ask them to check in on Ammi as he dreams of the man decaying like the Gardner family.

Not nearly the end…

What makes this story great is the mystery. So many unanswered questions allow many adaptations to put their own spin on the story. The fact that Lovecraft never reveals what is in the well or what happens to those who drink from the new reservoir, leaves much to the imagination.

I am skeptical about the new adaptation of this story. A modern take on this story may spice it up, but I will always appreciate the original. No matter how old is gets, and it’s close to celebrating its first century, it will continue to influence others.