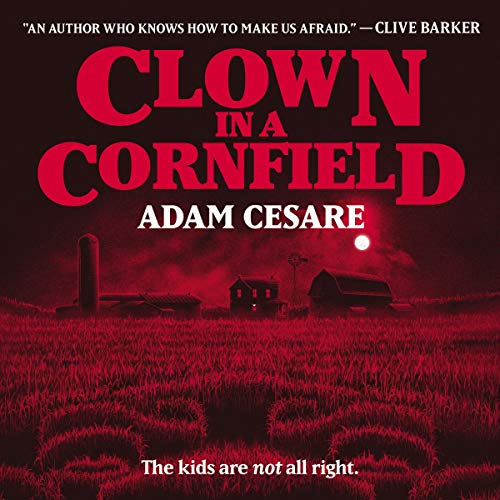 Same as the film genre, there aren’t enough people that appreciate the slasher novel. There’s more to them than just killers with an itch to slice and dice. Some, like Clown in a Cornfield by Adam Cesare for instance, are brutal conquerors in disguise, drawing their readers in through delicate savagery, likable characters, and a narrative that flows with surprising ease. I could wax poetic nonsense about this all day in an attempt to make myself sound prestigious, but I’ll be blunt — it’s amazing and you need to just fu**ing read it.

You know how people say “the meat just fell off the bone” when talking about good ribs, well the Clown in a Cornfield is a rack of excellent cooked ribs. The story slides right off the page and comes to life. (I say this as a compliment even though I hate when meat slides off the bone. I like it tough but that’s just me).

Probably best known for the novel Video Night, this is Cesare’s first dive into YA fiction and the result is an incredibly fast-paced, bloody slasher that gets right to the action with minimal loitering. It’s labeled a YA novel only because the characters are all high school age but other than that there’s really nothing YA about it.

“Quinn Maybrook and her father have moved to tiny, boring Kettle Springs, to find a fresh start. But what they don’t know is that ever since the Baypen Corn Syrup Factory shut down, Kettle Springs has cracked in half. On one side are the adults, who are desperate to make Kettle Springs great again, and on the other are the kids, who want to have fun, make prank videos, and get out as quick as they can. Kettle Springs is caught in a battle between old and new, tradition and progress. It’s a fight that looks like it will destroy the town. Until Frendo, the Baypen mascot, a creepy clown in a pork-pie hat, goes homicidal and decides that the only way for Kettle Springs to grow back is to cull the rotten crop of kids who live there now.”

I kind of wished that this came out in 2017 so that it could’ve cashed in on the killer clown craze IT restarted, but where Pennywise was all thriller and almost no killer, these clowns aren’t for dillydallying. It gets right to the chase almost too quickly, but by the climax, it balances itself out fairly well with most of the story taking place over a single night.

The novel starts with a tragic incident taking place in Kettle Springs, Missouri. A tragedy that will haunt the town and drag it into darkness. About a year later, new girl Quinn Maybrook, comes to town and almost immediately make friends with the local troublemakers. There’s the glossy Queen Bee Janet (who I loved to death), Ronnie and her boyfriend Matt, and troubled rich boy Cole who almost everyone has a vendetta against.

Tensions are high in the town of Kettle Springs. There’s a war going on between adults and teenagers as each generation blames the other for the town’s problems. This book reminds me of Scream for a number of reasons, mostly because it’s clever and though hyperbolized, stays grounded in reality. The characters are likable, the romances are established pre-book and unfold properly within the narrative, and the killer, or killers, are very real. They are real people with vendettas, burning with hatred that they feel the need to direct somewhere. It’s easy to tell when Clown in a Cornfield is set and when it was written for the author uses it as a commentary on the current state of the world; social media, politics, and social prejudges. It’s a good touch even if it goes a tad overboard at times.

Also, there is an LGBTQ relationship in the story that’s no treated as some shocking spectacle but is instead normalized, which I really appreciated.

It’s not exactly the deepest thing you’ll ever read but something that will stay with you a lot longer than you expect.

Clown in a Cornfield is currently being adapted for a feature film, most likely on some streaming service because theaters are just cruel fantasies now, so read up before Amazon or Netflix spits it out.

Remember if you want to buy the books just click below and if you do, we get some $ from Amazon.

Book Vs. Movie, The Mist