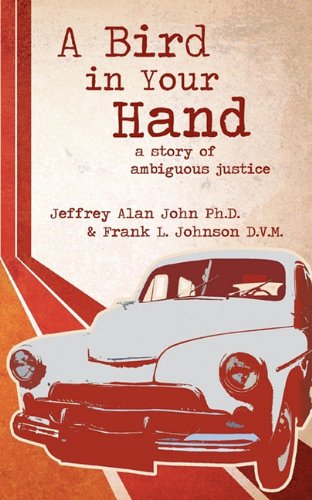 True Crime Studies: “A Bird in Your Hand” is probably the borest true crime book I’ve ever read

This little book was probably put together when one of the two authors, Frank L. Johnson to be exact, started looking for an excuse to talk about his father and hometown of Xenia, Ohio. A teeny tiny little town where major crime almost never happens. He then pulled out the first major homicide to happen during his father’s career as a judge and used it as the focus point in his passionate trek of Xenia, making for a book that’s terribly miscast in the genre it’s meant to stand in. A Bird in Your Hand: A Story of Ambiguous Justice is exceptionally dull. I don’t want to be harsh, but every chapter felt like one of my father’s many tales about Tumeric.

The biggest flaw of this book is that it feels like a summarization of something bigger. It’s as if they took a much longer, more detailed book that doesn’t exist, and turned it into a pamphlet. Despite being promoted as a true crime story, it shows very little of the actual crime. It skims over it along with the people involved, instead choosing to spend the majority of its time in court and on background details.

The book presents the case of Clarence Earl Tucker and Ernie Evans, two troubled youths that had a habit of getting into mischief. After going on a joy ride with a stolen car, bootlegging some liquor, and just doing what teenage boys do, they got pulled over by some police officers. Inside their stolen vehicle were a shotgun and a pistol, both damaged and neither intended for premeditated violence. One they were planning on selling and the other on repairing and also maybe selling somewhere down the line.

In the heat of the moment, though, Evans uses the pistol to shoot and kill an officer. There’s a brief moment of chaos in the street and within minutes, it’s over. There are three men down and another just standing there with his arms up. Clarence Tucker, though not completely free of a guilty conscience, was innocent of anything that had to do with the shootout, and this is the fact that A Bird in Your Hand by Frank Johnson and Jeffery Alan John, wants to talk about. Keep in mind this book is more interested in background details — the lawyers, the families of the lawyers, the judges, Ernie Evans’s girlfriend, and the author himself. The intended focus, which is Tucker and the murder he was an accomplice of, often goes unseen like a ghost in the background.

Tucker gets put away for life after the local police force him into a fake confession and then sway the court in their favor. Years after being sent away, he seeks rightful justice and this, what comes in near the midway point towards the very end of the book, is supposed to be the focal point of the story. That’s the “ambiguous” justice the book is naming in its title — A Bird in Your Hand: A Story of Ambiguous Justice.

This book has an unfortunate identity complex. It thinks it’s more unique than it actually is. “A story of ambiguous justice,” “a true crime story unlike any other,” but is it? Not to say that the death of a man, officer Earl Confer, or that the punishment of an innocent man isn’t tragic but nothing about this case stands out among the millions of other similar crimes that have occurred both before and after it. This is something that happens all the time in both police work and the criminal justice system.

The point A Bird in Your Hand is trying to make is that justice is not blind and is open to more than one interpretation, but it sure does take its sweet time getting there.

My opinion towards A Bird in Your Hand might possibly be influenced by my initial perception of it. Perhaps if I’d known that the book focused more on the city of Xenia and the author’s father, Judge Johnson, then I might’ve received it a bit more warmly.

It actually wasn’t as bad as I’m making it out to be because it had heart, an attempt to tell a genuine story that unfortunately gets buried under an excessive amount of background details, with an excuse for Johnson to mention his parents every three pages. When it comes down to it, I think Johnson and his co-author, Jeffery Alan John, had a lot to say, a lot to share, but had no idea how to do it. Large amounts of facts and details are dumped on you, usually, all at once, and written in a summarizing format. It gives a lot of information with as little space as possible, cramming it all in 236 pages.

If it had focused entirely on Tucker, or him and Evans, are gone in the fold and just discussed Judge Johnson the way the book seemed to have liked to, A Bird in Your Hand could have been a great read. It had the ingredients –small town, discrimination, a corrupt justice system, and a sympathetic young criminal — but it treated them like forgotten ghosts in their tour of Xenia.