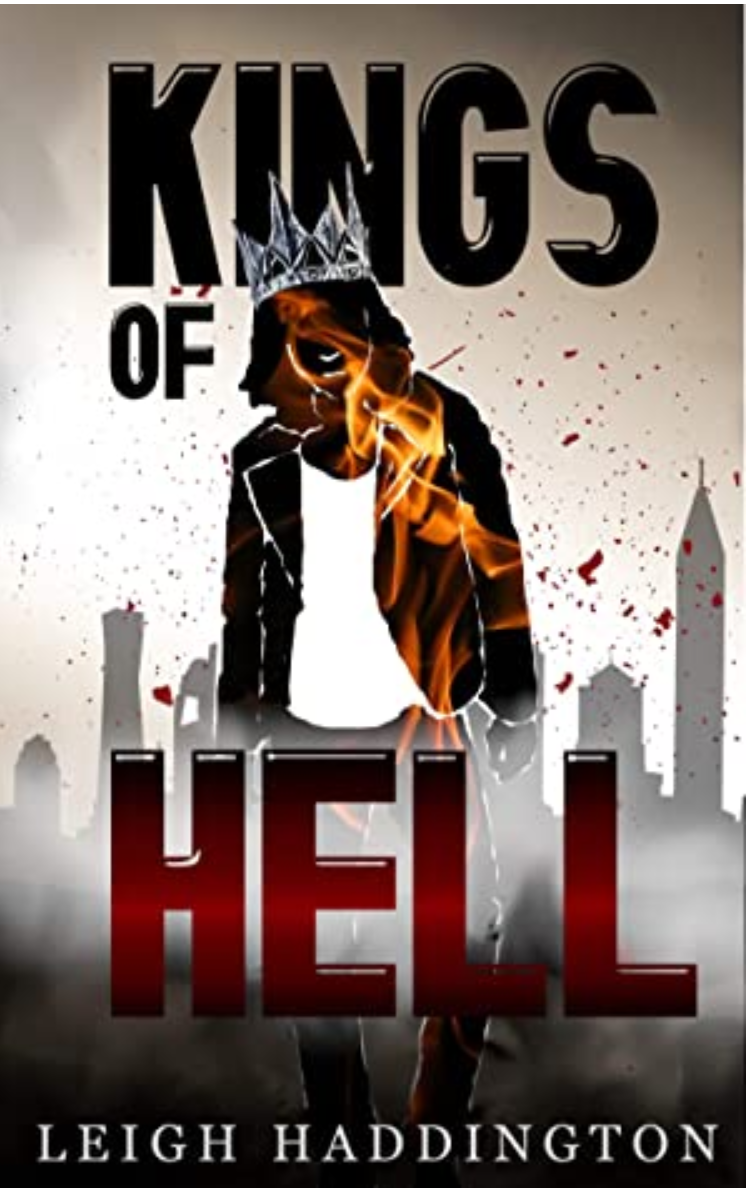 Kings of Hell by Leigh Haddington joins the ranks of part of our summer reading list. Ever wonder who would sell their soul to the devil – and what he even did with those souls? Kings of Hell takes a witty twist into that age old question. We all know the stories about the soul deals for blues and rock n roll, but what of the common person?

If you were dying – would you do it? Would you sell your soul?

How about if your child were dying? Would you sell your soul? Would you bargain with theirs?

This is where we meet the protagonist, Nick. He’s rather young when we meet him. His mom has a choice – make a deal with the devil to save her son for now but damn him for eternity when he comes of age – or – watch her little boy die.

Most parents wouldn’t hesitate to barter their own souls to help their kids. We see it every day when mom or dad (or both) work multiple Full-Time jobs to make ends meet. To put a roof over the head. To give their kids something they never had. But how many would trade on their own child’s innocence?

Leigh Haddington takes us on a path not chosen by us, but forced upon us. It’s the almost literal rendition of sins of the father, or in this case, the mother. What one grieving parent does in a moment of weakness leaves a ripple effect that threatens heaven and earth.

When you take the book’s premise of the devil exists and he’s rather tired of being the devil, you have a familiar mirror to the Lucifer comic and Netflix series. There are certain similarities in attitude, but that’s where it ends. Yes, it is difficult not to read Lucifer’s dialog in Tom Ellis’s voice. However, the actions and goals are unlike the modern retelling of the Lucifer narrative.

The world is interesting. Without spoiling aspects of the book, I can state that dimensions in space but not time play a central theme. Time is left as a mystery, in the sense that time plays a role in creating mysteries. The author fleshed the physical locations out, but it is the temporal ones that play key roles within the novel. A bit of McGuffining is as far as some mysteries go, though.

Ultimately, it is a story of reflecting in on oneself and seeing what you would give – truly give – to have your deepest desire (told you, that Tom Ellis just pops up).

Story telling can happen in a number of ways. One debate is the ‘therefore/but’ vs the ‘and then’ method. As discussed in screenwriting, the ‘this but/therefore this’ method is far stronger. It builds a line of reasoning and consequence for action. This often translates into character driven vs plot driven stories. King of Hell is a mix of both. It is stronger when it is character driven as we can see Nick struggle with the consequences of the things he’s done as any human would. When plot comes knockin’, the book wavers. There are some instances that could use a deeper exploration to allow the shift from ‘and then’ to ‘because.’

Show, don’t tell. We heard it a billion times – and with reason. When we see Nick and the Hellscape, we see a fleshed out canvas. Some of the Earthy scenes are grounded with description, as is the action. However, the book goes into ‘tell’ mode as the chapters continue. This is a quick read – it could benefit from slowing the pace down and filling in that sinew.

Overall, the book is an interesting and quick summer read. The concept is interesting, but not new. Haddington takes the things we’ve seen before – soul selling, demonic influence, revenge – and puts enough twist on them to make readers engaged. There are things that could have zigged instead of zagged – sure, but what book doesn’t? In the end, Kings of Hell is worth the sticker and would make a wonderful addition to anyone’s summer reading list. Don’t take my word for it, though. Check it out for yourself.

Where to get Kings of Hell by Leigh Haddington

Want the book-well guess who has a new hard cover option? Click on through to our sponsored link and get this one whilst on sale. That price is hard to beat, and it’s definitely worth the price of admission.

Desperate to save her son’s life, Jude Fitzroy, signs a contract with the devil. She gets to raise Nick until he is eighteen and then Lucifer will take his place – she will never know the difference, and Nick will rule Hell in Lucifer’s stead.

A life swap with the King of Hell wasn’t how Nick saw his future but the past had sealed his fate. Now, not only does he have power and magic beyond his wildest dreams, but also a life that is dragging him through his worst nightmares.

In a world where Hell is on the doorstep of everyone’s life, Nick discovers just how far he will have to go for his family, freedom and a future of being himself. Lucifer, however, has other ideas and will do anything to keep the contract in place.

From the Amazon blurb for Kings of Hell by Leigh Haddington

Finally – Riley Sager’s Survive the Night is his best yet